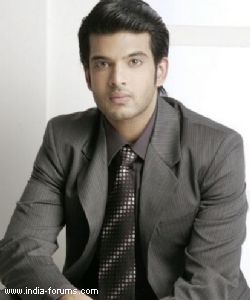 Karan Kundra aka Arjun of Imagine's Kitani Mohabbat Hai  - 2 was seen at his aggressive best recently when he bashed a guard while shooting for his show. This incident happened on Friday when the whole unit was shooting in the premises of Killick Nixon Studio.

We hear that the unit was shooting a sequence at the parking area, and the guard stopped them from shooting at that place. He argued that shooting at the place would create a problem with the traffic and he will be held responsible for it. This is when Karan apparently lost his cool and bashed the guard.

When contacted, Karan Kundra told us, "Yes, I bashed the guard who was stationed at the parking area. These guards have been misbehaving with us for some days now, and they have issues in each and everything. In this particular incident, they simply stopped our shoot and asked us to get out of there. This guard was very rude to our light man and I could not stand there watching all this. We have been working like a family for three years now, and I could not watch the guard scolding him. I simply bashed that guard in my fit of anger. I then went to the higher authority and complained against him.  In fact, I am brought up in such a house where I cannot take disrespect of anyone in front of me".

We also got in touch with a guard stationed in the studio and he on terms of anonymity confirmed that, "Karan was very rude with us. Being an actor, he should have the manners to talk to people. They were shooting without permission and this was blocking the traffic which resulted in a huge problem".

smilee17 9 years ago KITANI MOHABBAT HAI IS THE BEST SHOW ON TV
KARAN-KRITIKA THE BEST COUPLE !!!

Deepika Padukone Arrives at NCB, to be Questioned over ...
28 minutes ago