Mumbai, Jan 15 (IANS) When Anil Kapoor finally got to see the rushes of 'Saawariya', he wept copiously - his little girl Sonam had blossomed into an actress of substance.

'It all happened so suddenly. My wife Sunita and I had been imploring Sanjay Leela Bhansali to let us watch portions of the film. Suddenly one fine day he agreed. We rushed out and reached his place in five minutes, before he changed his mind,' he said.

Anil is still re-living the experience in his mind.

'I got very emotional watching Sonam. What he has done with 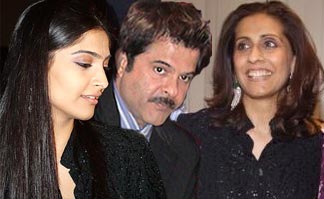 Featured Video
her is amazing. Why just Sonam, anyone who works with Sanjay is transformed. If only I was that lucky.

'The struggle that I've gone through to be where I am cannot be described easily. Our kids have it so much easier.'

Star daughters are usually kept away from the prying eyes of the media and when they decide to join Bollywood, it creates a lot of hullabaloo in the film circuit as well as in their families.

Unlike Sonam, when Sunny and Bobby's sister Esha Deol decided to be an actress, there was much disapproval in the Deol household.

Says Hema: 'Dharamji initially didn't like the idea of Esha being in films. In fact, the first film which he liked and approved of was 'Ankahee'. That's the first time he felt Esha had grown as an actor.'

So far it's been the star-sons who have ruled the roost. Now it's time for the daughters to make their presence felt.

Recently, Shweta Bachchan took the plunge when she decided to anchor a show on television. Her whole household was behind her in her decision. Now one hears Hrithik Roshan's sister Sunayana is all set to make her presence felt from behind the scenes.

Sunayana will be following in the footsteps of Rakhee's and Gulzar's daughter Meghna who forayed into showbiz as a director.

Says Meghna: 'I neither had the looks nor the temperament to face the camera. I always wanted to be a director. Did I ever feel burdened by my father's reputation? I never allowed myself to think about it. If I did I'd probably not be able to make a single film. But, yes, my father's approval matters a lot to me.'