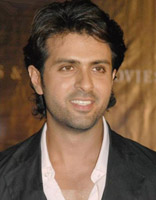 Millions of youngsters, in all the corners of the country,dream of playing for India! A dream which incredibly only 'One' in 100 'Million' realizes.


'Victory' is the story of a father,Ram Shekhawat (Anupam Kher),who saw such an impossible dream for his son! This is also the Heroic story of his son Vijay Shekhawat (Hurman Baweja).Hailing from the small town of Jaisalmer,Vijay Shekhawat becomes India's latest world-class batting sensation and is catapulted to super stardom! But it is glamour and glitter of this very demigod status that makes the young,vulnerable small town boy Vijay stray from his true vocation of cricket.


Unfortunately this leads to a loss of focus and to a miserable drop in his performance.But by the time Vijay realizes the error of his ways,it is too late and he finds himself thrown out of the Indian cricket team because of disciplinary reasons. Suddenly the hero of the cricket crazy India becomes a villian in everyone's eyes.His father Ram Shekhwat's dreams are shattered and suffer a paralytic stroke.


This tragedy awakens Vijay's conscience and sense of honour.He wants to redeem himself in the eyes of his father and every Indian.Against great odds,he once makes it back to the Indian team and gets to play in the finals of the Champion's trophy against Australia where he plays a stellar role in enabling India to win the Trophy.

Where in the emotionally moving final,in spite of being hospitalized mid-innings because of an injury,Vijay returns to bat,risking permanent injury,when India are nine down,to pull off an impossible victory against the world champion Australia.In this match Vijay Shekhawat fulfills his father's dreams and enters the pantheon of Indian cricket.