Roger Federer's historic French open win Sunday has gone down so well among the sport's enthusiasts that even Bollywood superstar Aamir Khan couldn't stop drawing parallel between himself and the Swiss. 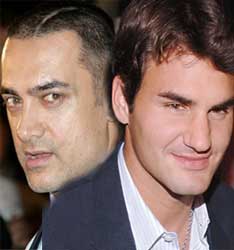 Featured Video
The 27-year-old is infamous for shedding tears after winning a trophy and Aamir thinks even he does the same after his films do well at the box office.


'Federer finally wins the French Open. I'm so happy for him... But he is certainly the only one to cry like a baby each times he wins a final! Thats one thing I share in common with him. I cry like hell each time any of my films does well, but I also cry when they don't,' Aamir posted on his blog Tuesday afternoon.


Federer created tennis history when he defeated Robin Soderling 6-1, 7-6 (7-1), 6-4 and won the French Open title to become the sixth man in tennis history to win all four majors.


Federer also joined Pete Sampras as the biggest winner ever in the sport and the latter even went on record to say that the former went on to earn the title of 'best tennis player in history', even before winning the Roland Garros.


Aamir, however, is against such titles.


'Sampras says he (Federer) is the best ever tennis player in history. I'm not sure if there is such a thing. Quite frankly each of the leading players of their time were equally difficult to beat. (Bjorn) Borg, Sampras himself, not to mention (Rod) Laver,' Aamir further wrote.