Abhijeet Sawant, the winner of Indian Idol first season, is doing really well in the industry and both of his albums have been a huge hit. Participating in Jo Jeeta Wohi Superstar, Abhijeet has proved that he is a versatile singer and has been the favorite of both the judges and the public. We caught up with him to know about his future projects and his journey so far as a singer. 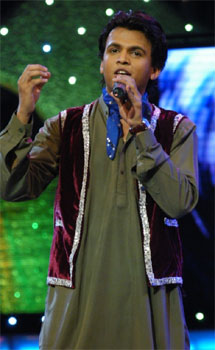 Tell us some thing about your journey right from Indian Idol1 to Superstar?
I think it was a beautiful phase I have gone through. When I was doing Indian Idol1 I never thought I will be here in Superstar. The popularity of Indian Idol and the way it has been perceived, has gained me the value of a star. After that my first and second album has been working really well.

What do you have to say about the incident when Himani got flak from Farah Khan?
I was a bit hurt, but I think it was a normal reaction by Farah ji. We i.e. all six champions thought of taking the blame on us, but Himani took everything on her. At the end of the day it's a part of the game, sometimes you hear good and sometimes bad and in reality shows one has to be prepared for everything.

You have been giving one great performance after another and it is also true that you have evolved as a versatile singer since the II days. If you were to credit someone for this, who would it be?
I would like to give the credit to myself as after Indian Idol, people said that Abhijeet can only sing a soft romantic number and he is not versatile. I wanted to prove myself to the world. I actually studied myself and then tried to analyze where I was going wrong. Now I have completed two albums and one film as an actor.

Talk us thro' your film Lottery?
I have recently completed shooting for the film Lottery by 3s Creations and I am playing the lead role in the film. Hopefully if everything goes well then there are chances that it will release at the time of Diwali.

So you are going to multi-task?
I think the world demands people who multi-task. The days are gone when a playback singer would only sing and do nothing else, but I feel now the times have changed and one has to be versatile.

Indian idol 4 is on its way, what do you have to say about that?
Well I was offered anchoring for Indian Idol 4, but due to time schedule I couldn't make it. Well the auditions have just started. To be very frank except for the first Indian Idol the other two haven't gained huge popularity, let's see if this gives!

There are many people who said that Abhijeet has disappeared after Indian Idol. What do you have to say to this comment?
As I told when one climbs success, there are some people who support you and there are some who say things against you. Yes, many people said that I have disappeared I think a reality show can only give you a platform to showcase your talent, but after that, you have to give your best and make a name for yourself in the industry. I think today whatever I am is because of Indian idol.

*Sparsh* 12 years ago he is really a great person and an amazing singer..

desi chic 12 years ago I never watched Idol... but I watch JJWS and Abhijeet has grown on me like none other. He is a fabulous singer, so versatile and a great human. His humility is very sweet. God bless him and I wish him all the luck!

-Akanksha- 12 years ago to take it upon himself to see what he was doing wrong, improve, see how much people love you, and still stay humble, that's one trait of a good person. he really deserves to be superstar; he's been singing soo well!!! keep it up abhi :D

hindu4lyf 12 years ago Arre yaar,abhi yaad aaya, sumbka nepali prashant kaha hain re? haha
everyone had so much faith in him-he wont be another sandeep, but he is probably back in the army now too! Im sure he does that job better atleast!
Love abhijeet! He is a true Mumbaikar! Coming from asia's largest slum, look where he is now, hats off yaar!!!
Thanks!

spsharmila 12 years ago Thanks for the interview.

Abhijeet has indeed evolved as a versetile singer.