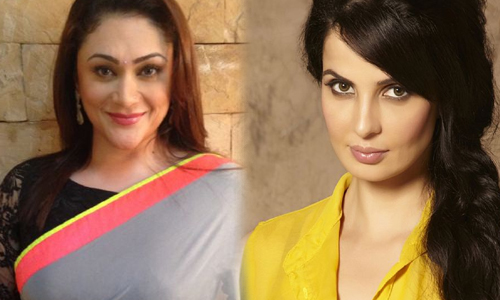 TellyBuzz had earlier updated you with the news of Rukhsar Rehman replacing Eva Grover for the character of Anjali Purohit in Zee TV's Aur Pyaar Ho Gaya. Eva had shot for the show for three days with Malaria and later got replaced by Rukhsar. This is her second venture with Rajan Shahi's Director's Kut Production after Kuch Toh Log Kahenge.

"It is just that I had Malaria and I had a relapse of Malaria as well. I have been really unwell for quite some time now. The production house was very much aware of my state because I started shooting with Malaria. I expected a little bit of leniency and understanding from the production house which was not happening. I was sick on the sets during the three days that I shot and they had to call the doctors on the sets. My Blood Pressure was soaring high but I do not think anyone took it seriously; I was going to fall and faint like that. Anyways, doctors came and all the actors and production house knew about it but everything was taken for granted. You obviously get a certain kind of weakness in Malaria and you cannot stand for ten to twelve hours. But I did shoot thinking that it is new entry and need to establish the character properly. Gradually, I came to know that further they will shoot for eighteen hours. So I felt I could not physically be fair to them and they could not be fair to me. So that is the only reason which is a big reason because health comes before anything else. Also, I would like to clear I do not have any kind of issues with the production house. Now that I am not shooting, I have got time to relax and concentrate on my health and recover soon."

Well, Eva we wish you a speedy recovery and all the luck for future endeavors.

+ 2
6 years ago Don't watch the show but Rukhsar Rehman ... was wondering how she would fit the role of a mother being so young and pretty and all.

+ 3
6 years ago Get well soon Eva Grover.
Rukhsaar Rehmaan rocked as Dr. Mallika in Kuch Toh Log Kahenge. She has awesome screen presence. All the best for APHG Rukhsaarji. But U seriously doesnt fit as Raj & his sister's mother. In fact U should have been cast as Hero's sister.

me too agree wid Masu..

6 years ago Waiting to see Rukhsar Rehman back...She rocked as Mallika in Kuch toh Log Kahenge...You rock MAllu...but you are too young to play a mom