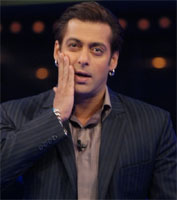 Salman Khan, the anchor who has been the favorite of audiences was unwell during the shoot of Dus ka Dum recently.

The actor kept murmuring to one of the contestants, “My tonsils is acting up, I should have got them removed when I was young. But then I did not, because I had a cavity in the tooth and was afraid of having ice-creams after the tonsils operation. Now the cavity is fine and has been taken care of, but the tonsils has turned out to be a major problem”.

Well, this is Sallu mia at his candid best!! But why is it that he is not in the best of moods only when he is hounded by media? This is a million dollar question that only Salman can answer!!

14 years ago hope papu get well soon! i love him on dus ka dum!

14 years ago aww, hope he gets them removed soon!

+ 2
14 years ago aww! hopefully her gets them removed soon! he's such a good person! wish him good health very soon!

+ 2
14 years ago lol,hahaha well he should get them removed soon.

+ 2
14 years ago poor sallu
hope it gets better soon

14 years ago hope he feels better soon, he is soooo sweet, the best person :)