As part of its special programming centred around the Unforgettable Tour which features the greatest superstars of Indian Cinema, NDTV Imagine gives audiences a glimpse of Amitabh Bachchan in an exciting new role as host of a 3 part series show titled Big B’s Den. 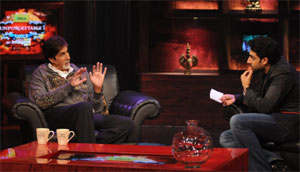 Featured Video
For three consecutive Fridays beginning September 19, 2008, Big B’s Den will present an intimate conversation between Amitabh Bachchan and Aishwarya Rai Bachchan, Abhishek Bachchan, Preity Zinta, Riteish Deshmukh and Vishal-Shekar of the highly successful Unforgettable Tour.  Each week Big B will put his guests in the hot seat and don the hat of the host, getting his celebrity guests to let their hair down and be at their candid best!

The first episode of this 3 part series which airs on Friday, September 19th at 10:00 p.m features Big B in conversation with Abhishek Bachchan.  Known for his sharp wit and for pulling practical jokes on his friends and family, Abhishek turns the tables on his dad and takes over as the host of the show, putting his father on the hot seat!  This fun and entertaining episode captures the bond shared by the country’s most loved father–son duo.  And Big B does not disappoint!!! From his first live performances to his nicknames for each of the stars on the Unforgettable Tour and from fan reactions to spending quality time with his family, he gets candid with all his answers.

With Bollywood’s greatest superstar as host, the show promises to be entertaining and insightful, giving audiences a glimpse of the intimate details and experience from the Unforgettable Tour from each of these stars.

Enter the Big B’s Den every Friday at 10:00 pm only on NDTV Imagine for your weekly quota of some Unforgettable facts of this truly unforgettable tour straight from the brightest stars of Bollywood themselves.

14 years ago I attended the Unforgettable tour in Atlantic City! It was so much fun watching Big B from 4th row by the stage. No one can impressed as much as Big B! The aura the magic hes really got class and style to think he is 65! When he spoke the dialoge from DEEWAR he maid me cry!!!!!!!!! So no one can ever come close to the Big B in our bollywood film history

14 years ago It will be interesting to watch Big B as a Host. I was one of the luckiest ones who watched Unforgettable in Toronto and really it will be Unfort=gettable as Big B excelled as a stage actor too. I am never an Ash Fan and I will never be, but I must give her due credit that she is a fantastic dancer and she looked gorgeous. Abhi, Akshay, Preity, Hitesh, Vishal and Shekhar, all of them were really fun to watch.