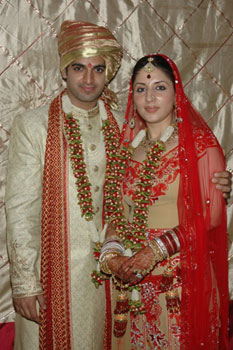 Sid Makkar who is playing the role of Shankar, Kashinath Pandey’s youngest son, in the increasingly popular soap “Mere Apne” on Channel 9X got married on December 2nd to Shalini, (an airhostess with Saudi Arabia) his long time friend and sweet heart after knowing each other for more than 2 years.

Interestingly the actors of 'Mere Apne' too have been shooting a wedding sequence, but of Adiya, Shankar’s elder brother, being played by Amit Jain. Ironically where Sid’s marriage was a low key affair, it was not so in Aditya’s case. One of the grandest marriage sets costing around 30 lakh was created for this wedding sequence and Mansur Ali Pirani popularly known as Babubhai was in charge of designing the set. Smriti Irani, the producer of the soap “Mere Apne” made sure not to leave any stone unturned to create one of the most lavish marriage sets in recent times.

+ 6
14 years ago hey happy for them
wish good luck for thier future!

14 years ago Congrats to the happy couple..
You both look really good together,

+ 3
14 years ago congrats to them, they look really sweet!

14 years ago congrats&all the best to their future