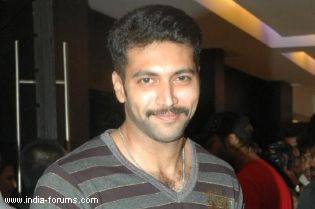 Actor Jayam Ravi is happy that his brother and director M. Raja has started acting and says they will soon work together in a movie.

"We're happy that my brother has finally decided to act. I'm currently busy shooting for 'Thani Oruvan', and as soon as I complete it, we plan to act together in a film. It might take a while but it will happen in the future," Ravi said.

Meanwhile, Ravi is working hard to prepare for his role as a boxer in upcoming Tamil actioner "Bhoologam". He gained 15 kg to get under the skin of the character and claims that the role is a far cry from his chocolate boy avatar.

"It was not easy playing a boxer. There was a lot of physical transformation that was needed for the role. I gained about 15 kg to play my part. Importantly, audiences won't get to see my chocolate boy image in the film," Ravi told IANS.

"We spent many hours shooting in the sun. It was extremely challenging, but I'm glad that we have successfully completed the film and it's gearing up for release this month," he added.

Australian wrestler Nathan Jones will be seen in an important cameo in the film, which is produced by Aascar Ravichandran.

Deepika Padukone to Reach Mumbai From Goa in Charter Plan; To Join NCB ...