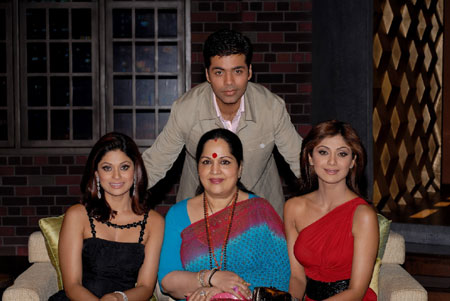 She Stood Up, She Battled and She Conquered !!! She found what’s bad and what’s ‘goody’ and emerged Victorious. An Ambassador against Racism, a household name in Britain… Karan Johar’s first guest for the weekend is the Glamorous and Sizzling Hot Shilpa Shetty. To join her and face the Karan Music will be the star of the new generation, the sister of Shilpa, Shamita Shetty who is doing exceptionally well in carving a name for herself in Bollywood. Well, the Guest List does not end here as Karan later calls the Woman behind the Success of both the Shetty Sisters, their Pillar of Strength, their doting mother, Sunanda Shetty. Don’t forget to tune in to catch the Shetty Sisters take centrestage with their mum Sunanda only on Koffee with Karan, this Sunday, June 3rd at 9pm, On Star One and Star World.

This Episode will surely be a Hotcake for the Audience - watch Shilpa talk about her Success post Big Brother, the ups and downs in her Bollywood Career, more about the Jade Goody Episode, that will provide the Real Spice to the Koffee. Get ready to watch the anger of Shilpa towards Indian Press, who referred to her as a B-Grade Actress and talked a lot on the Akshay Kumar episode again and again. Get to know more on the tension-filled moments that Shamita had back home on seeing her sister crying in every news channel. Catch the relief and happiness that the Shettys’ had when Shilpa won the ‘Big Brother’. When quizzed whether there is competition at home when it comes to men in their lives, the Shetty sisters shrug it off to say that they both are not dating anyone as of now.. Watch the Guiding Mother Sunanda in conversation, as she says that she had predicted international fame for her daughter Shilpa!!

This is just not the End, as no Koffee with Karan show ends without his famous Quick-fire Rapid Fire Round. If Shamita was approached for the next season of celebrity Big Brother, what would she say? The funniest proposal that Shilpa got, after she won celebrity Big Brother? An actor Shamita has worked with that she finds hot? One Bollywood hunk that Shilpa thinks is hot, sexy and a huge turn on? Who wins the coffee hamper! Wait and watch!

If you want to get a sniff into this interview, here is the excerpts for you:

Karan: Congratulations on all the success… on Big Brother… how does that feel… how did all that happen?

Shilpa: Well, it came through a common friend… this was a celebrity Big Brother and I knew it had a huge TRP rating in the UK… I didn’t know what it entailed … but, I also thought it was huge opportunity for an Indian to go on a show like that… and I took it as a huge compliment… and I had nothing to fear Karan because they tweaked the contracts and all… and Channel 4 has never done that in their entire history… they changed some clauses.

Karan: Like what were your clauses… that you won’t wear certain clothes…

Karan: Did you expect this Jade Goody episode happening in your life at all?

Shilpa: I don’t think anybody expected that.

Karan: Were you completely thrown off when it was happening?

Shilpa: Ahhh… when you are in the house… that’s your world… you don’t know what’s happening in the outside world… the way people were perceiving things … it was way bigger than how we were looking at it …

Karan: She said the most terrible things to you?

Shilpa: Not in front of me …

Karan: Both of you’ll are looking so stunning… so hot… you’ll are obviously competing for single men now… because both of you are not in relationships.

Shilpa: No… no … on that front we are not competing with each other… because her kind of men and my kind of men are very very different …

Karan: And what is your kind of men Shilpa?

Shilpa: Honestly there is no stereotype … I will tell you for Shamita… everything starts and ends with a great body… for me… he has to have a heart of gold …

Shilpa: Very boring na I am… what to do…

Karan: Were you at all disturbed when everything was happening inside the house… there was so much being said ...

Sunanda: I think she is a very brave child and she did handle the entire situation with a lot of dignity… I was happy that she could walk out whenever she wanted to … since she stuck around … we knew she was in a position to cope…

Karan: You were all sad about the things that were being said to her on the show?


So, don’t forget to tune in as Karan chats with Shilpa and Shamita Shetty, who are joined by their mother Sunanda Shetty on Koffee with Karan this Sunday, June 3rd at 9 p.m. on Star One and Star World.

15 years ago omg! is it just me, or do they look alike?? i think the only way i could tell them apart were by their eyebrows! lol!

15 years ago Great. Can't wait to watch it.
Wish they put subtitles so I could understand what they talk about.

+ 2
15 years ago Thanx cant wait 2 watch it. I watched Big Brother only 4 Shilpa and she really carried herself well -whatever happened was a huge thing here in the UK! I've started liking her alot more now by seeing her on tv.

I have really started liking Shilpa - not a big fan of Shamita though, the sisters are really far apart it seems - and I am looking forward to it.
Thanks Sree...as usual, wonderful write up !