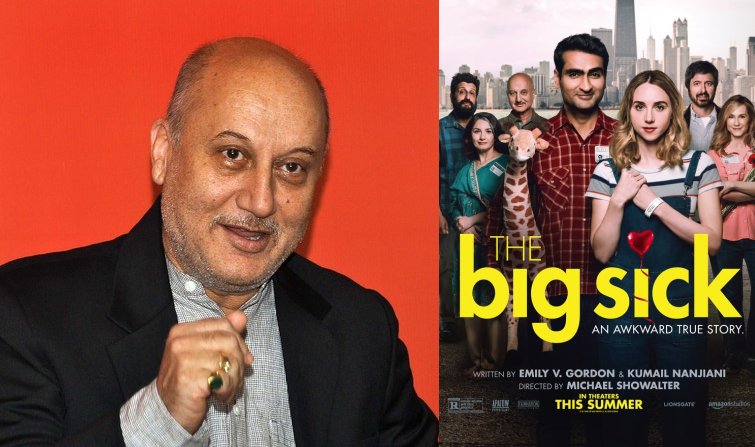 Veteran actor Anupam Kher, who is looking forward to the release of his 500th film -- the Hollywood entertainer "The Big Sick" -- says there were chances he would have missed being a part of the film at the eleventh hour.

"This was an important film for me, and my work permit (for the US) had come a little late. I was almost going to go out of the film because my work permit had not come... I was in New York on a tourist visa, but it happened. And my faith in the 'kuchh bhi ho sakta hai (anything is possible)' philosophy continues," Anupam told IANS over phone from Mumbai.

Directed by Michael Showalter, the film is based on the real life of Pakistani-American stand-up comedian and actor Kumail Nanjiani, who has co-written the movie with wife Emily V. Gordon.

The film delves on the culture clash and how Kumail dealt with the emotional tug-of-war between his traditional Muslim family and his heart. It had its world premiere at the Sundance Film Festival earlier this year, and was received well.

Now "The Big Sick" is releasing in the US on June 23, and in India a week later.

"The fact that it is releasing in India is a great feeling, because however much you go abroad for whatever reason, you want it to be seen in India," said Anupam in the interview before he left for New York for the movie's American premiere as well as for some other commitments.

"It's an interesting role in a mainstream American film without any cliches," said the actor, who has been a part of international movies like "Bend It Like Beckham", "Bride and Prejudice", "Silver Linings Playbook", "The Mistress of Spices" and "The Headhunter's Calling".

Apart from "The Big Sick" premiere, Anupam will be part of a panel for the International Day of Yoga on June 21.

He is also excited that for the International Indian Film Academy (IIFA) Awards in New York next month, he is nominated for the Best Supporting Actor (Male) category for his performance in "M.S. Dhoni: The Untold Story".

On the work front in the West, he also has a new detective series coming up, in which he plays father to stand up comedian Russell Peters. Anupam has also finished the second season of "Sense8", while on the home turf he is excited about being a part of films like "Indu Sarkar" and "Toilet: Ek Prem Katha".

Talking about how he has managed to continue getting meaty parts in his long career, Anupam said: "If you keep working hard and you're honest, it will keep happening."

Sanjay Dutt Admitted In Hospital Due To Breathing Problems; ...
37 minutes ago