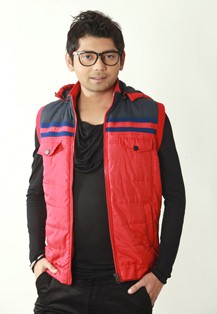 The naked yoga guru might have been evicted from the Bigg Boss house within a week after his power packed wild card entry, but the Bigg Boss Saath 7 contestant has managed to be in the news even after his short term stay at the controversial house, blame his straightforwardness & revealing some of the inside gossips!

In an earlier interview, Vivek Mishraa claimed to have witnessed Kushal Tandon & Gauahar to have locked themselves in the bathroom during the former's stay which both Kushal & Gauahar called Vivek's claim to fame.

This bold & blunt statement made by Vivek Mishraa deeply affected Gauahar to an extent that, in one of the interviews post the grand finale she confronted that she holds no grudges for any of the housemates but Vivek Mishraa.

Least affected by the harsh comments from the Bigg Boss Saath 7 winner, the quirky & witty Vivek exclaims, "I have never come across anyone as manipulative as Gauhar Khan. She has applied Saam Daam Dand Bhed to win the Bigg Boss title & look... she won. So it would not be wrong to say that she played a clever game. I did state that from the very beginning & still maintain it. Other housemates were of the same opinion but after her victory, I doubt they would make any statements against her."

Further talking about Gauahar & Kushal's PDA on national television, Vivek further makes his usual bold statement, "Isn't it evident? I believe Gauhar & Kushal were smitten by lust mistaken as love. Now they are out let's just wait & watch till when does that last for all I care!' chuckles the yoga guru.

Vivek's entry changed the dynamics of the show completely throwing light on Kushal- Candy Brar story, talking about Armaan Kohli's live- in girlfriend that did media rounds for quite some time, " Come to think of it... a lot changed after my entry. But audiences apparently didn't find me entertaining & got me evicted. Had I been inside the house for much longer...you have no idea what you were about to witness. I have no qualms about such statements. Dost Na Sahi... Dushman hi Bana liya."

.Shivam. 6 years ago This Vivek guy is totally mad! Its a publicity stunt... Jealous & a looser Vivek

Heart2Soul 6 years ago I mean seriously???? What loser you are man, you couldn't do good in the show therefore you were evicted. Now you think you can get some attention by talking about other house mates, that's sooo sad dude. Get a life. And instead of bitching about others you should work hard and try to be good because good always wins in the end,,,,,,, Example;;; Gouher and tanisha

sepultraonyx 6 years ago all dis vivek guy wants is attention...no wonder he was not even invited in d finale of bb :P

forums_girl 6 years ago Wow really now?
Vivek, you TRULY need to go get a life!

Yuvika_15 6 years ago he's obv not going to like kushal and gauhar so is bound 2 talk negative abt them and vice versa. I don't blame vivek for disliking kushal and gauhar so much becos kushal was proper mean 2 him and gauhar smiled throughout... the truth is no1 in that house was any1s true friend...they were all playing a game except asif and ellie, so for the others to come out and say the other was playing a game and they weren't is rubbish wen its obv they were in it to win it.

--Ariana-- 6 years ago hahah...one useless guy trying to gain publicity from Gauhar!! Big time LOSER who did not even deserved to stay one day in the BB house!

Gauahargeous_N 6 years ago Vivek is such an attention seeking loser! he was only on the show for 5 days but talks so much crap! worst WC ever! Gauhar never even said anything about this guy... he's so jealous & bitter!

ShreyALuVKushaL 6 years ago Vivek has such a cheap thinking,Gauhar and kushal and others confirmed that Gauhar was ill and kushal was just by her side..Even doctors came to check on her...Gauhar clearly said that on her iv..Footage hungry-Vivek moron