As 9X’ Kaun Jeetega Bollywood Ka Ticket approaches the most crucial final stages, this week gave emphasis to costumes wherein the Jodis needed to be dressed as the actors in the particular song. And the fitting guest jury on the show was none other than the fashionista’s favourite Vikram Phadnis. 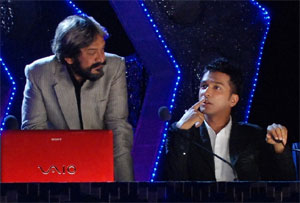 Featured Video
The contestants who were highly criticized for their fashion sense was the Western zone contestants Jay Bhanushali and Rituka. Both performed on the ‘Shaher Ki Ladki’ number of Raveena Tandon and Suniel Shetty, dressed in silver color outfits which didn’t fit them. Seeing their costumes Vikram was surprised and shocked and he seeks explanation from the Jodi about why did they choose to dress so horrendous on the show. Jay Bhanushali comments that they were provided the same by the stylist post their detailed discussion which further surprised Vikram. The Man of Fashion also went on and told Amrita Singh that actually Jay looked like a waiter from an Udpi hotel which got all the other mentors laugh. 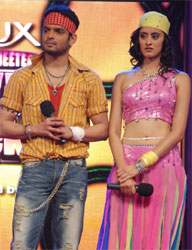 This battle for the ticket to the 70 crore movie deal produced by Balaji Telefilms and Popcorn Entertainment gets tougher with only last 4 jodi’s remaining on the show. The guest Jury on the show Vikram Phadnis, also made the hosts of the show Suvarna and Salil both looked splendid with his creations.

But the twist in the tale this week was that Vikas Manektala from the Northern Eagles who was seen in the bottom three for the past two weeks, was declared as the Top Jodi along with Naman-Bindu.

With this, the show is left with 1 Jodi each from the 4 Zones, and the coming weeks will see the emergence of the strongest zone!!

+ 2
14 years ago even chetan n snayogita were criticized for the costumes.. surprised how come that is not mentioned...anyways chetan still looks smart in whatever he wears...and so does jay:)

afreen_14 14 years ago ohhhhhhhhhh yes!!!!!!! i am glad they r out i never liked them
thnxxxxx alot