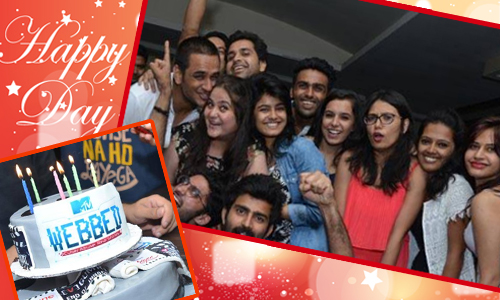 Vikas Gupta who is the programming head of MTV India and launched his own production house named Lost Boy Productions hosted a success bash for all his near and dear ones. Over the time, Vipul has achieved a tremendous success in the industry and so to make it memorable actors from his shows Gumrah, MTV Webbed Season 2, Pyaar Tune Kya Kiyaand many more joined him for the bash.

TellyBuzz contacted Vikas to know about his achievement and he says, "We had lots of fun in the party, many actors from different shows came together in the celebration. We had a cake cutting ceremony for Lost Boy Production shows along with the actors associated to the shows. As I think it is a team work and I alone would not have achieved this success. Achieving was not my concern as I was more into making a good content based shows which would work for my production. So it was nice to have all my actors accompanying me in the success of the Lost Boy Productions."

Then we asked him about his connection with Ekta Kapoor and he says, "I have worked with Ekta and Balaji Telefilms before and it was a learning time for me as I have learnt a lot from them. I am glad that they could make it to be a part of my celebration."

We wish Vikas good luck for his future endeavors!

ttrocks 6 years ago Love you and miss you so very much Kritika Kamra. meenu0527 6 years ago Love U Kritika Kamra and miss ur lovely presence on tv screen .plz come back with nice project !!

ttrocks 6 years ago TB, Thans for tagging Kritika Kamra and Karan Kundra. Wish them all the very best for all upcoming projects.

MizzDaisy 6 years ago Thanks for sharing Ankita and sushant are amazing..

premana 6 years ago thanx for posting this article i-f.love u arjun bijlani

shibz 6 years ago The trio

Karan Kundra, Kritika Kamra & Vikas Gupta working together again on another fiction would be Awesome!