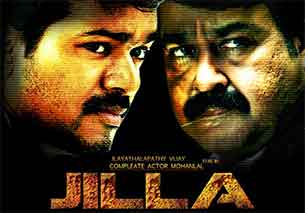 Tamil superstar Vijay, who has teamed up with Malayalam superstar Mohanlal in upcoming film "Jilla", has requested his director to place his name after his senior co-star's in the film's title card.

While Vijay recently completed over two decades in the industry, his Malayalee counterpart Mohanlal has over three decades of rich experience in filmdom.

Mohanlal, however, wanted Vijay's name to appear first on the title card.

"Lal sir also called me and asked me to place Vijay's name first on title card because he is a superstar in Tamil cinema and the film also happens to be in the same language. But Vijay sir was headstrong that we don't have his name first on the screen," he said.

"Finally, we have decided to place Mohanlal sir's name first on the title card," Nesan added.

Kajal Aggarwal Gets Secretly Engaged To A Businessman in an Intimate ...