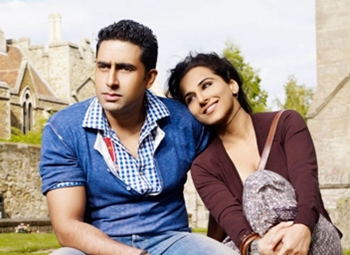 With the shooting of her upcoming flick No One Killed Jessica successfully wrapped up, Vidya Balan is now able to rest and recover her injured shoulder. However, the buzz is that the actress refuses to sit still for long as she gears up for her next project, even if the role is a short cameo.
Two films old director, Rohan Sippy (Kuch Naa Kaho and Bluffmaster) is eager to cast Vidya in his next film, Dum Maaro Dum, whilst inevitably best friend Abhishek Bachchan stars in the leading role.

Sippy was apparently on the lookout for an actress who can play the role of a traditional Indian beauty and who better than Vidya as the perfect choice?
Vidya, whose great on-screen chemistry with Abhishek was visible to us in Paa, was very excited with her character narration and is ecstatic about stepping in for a cameo opposite Junior Bachchan.
The two stars were also previously seen together in Mani Ratnam's Guru, although Vidya portrayed the role of Abhi's sister in the movie.
This film has surely garnered a lot of curiosity amongst our Bollywood-crazed junta even before its making; firstly, because of its peppy title and secondly, because of the Abhi-Vidya jodi.
Here's hoping that this outing will be just as successful for the duo!
5 Likes

'Billions' Renewed For Season 6
56 minutes ago