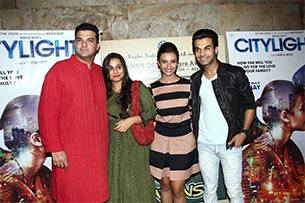 Hansal Mehta's much-awaited film Citylights has been winning the hearts of everyone who has been seeing the film. This time actress Vidya Balan was deeply moved by the movie.

The powerhouse performer attended a special screening hosted by Mahesh Bhatt on Sunday and heaped praises on the film and the lead pair of the film -- Rajkummar Rao and Paralekhaa. Vidya attended the screening with her husband Siddharth Roy Kapur and spent quality time discussing the film and the performances with the director and the cast after the screening.

The makers have shown supreme confidence in the film as they have started hosting the screenings well in advance and looks like the marketing campaign is on the right track.

Alia Bhatt, who saw the film last week, too was left speechless after seeing the film.

The film is certainly making all the right noise and is set to release on May 30.