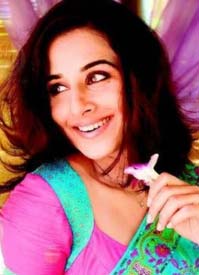 Vidya Balan in her upcoming movie Ishqiya was required to suck on Arshad Warsi's thumb suggestively and every time she sucked on Arshad's thumb she burst into laughter.


Vidya stated that fortunately Arshad is a friend. She has gotten along well from the time they did Lage Raho Munnabhai together. She doesn't know how she'd have been able to do a scene like putting her co-star's finger in the mouth with someone else. That gesture of sucking Arshad's thumb was so raunchy and sexy, so not Vidya. The young lass couldn't connect with it all.


Talking about her character Vidya says, "I play this rustic voluptuous woman. All my weight-loss happened after I did this film. I had to looked filled up for this part.


In Ishqiya everything from the way I wore my saree to the way I looked at men, was alien to me. The role exposed me to a new way of interpreting a liberated woman. My character in Ishqiya may not know about feminism. But she's truly liberated."