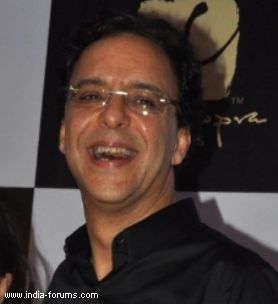 After megastar Amitabh Bachchan praised Nitin Kakkar's "Filmistaan", the movie's actors Sharib Hashmi and Inaamulhaq have now impressed filmmaker Vidhu Vinod Chopra. As a gesture of encouragement, Chopra offered to sponsor a vacation for them.

"Chopra watched the film as he had heard a lot about it from his friend. He also met the actors and told them that he would promote the film in any way he can. During their chat, he even offered to sponsor a vacation for them," said a source.

Sharib was equally "overwhelmed" to meet the "3 Idiots" producer and said: "The fact that he offered us a vacation after watching the film means the world to us. For us, the gesture really counts. We are indebted to have his blessings."

Inaamulhaq says that Chopra gave them "an insight into the world of cinema".

"I feel he has given me a new direction in life. There's a huge responsibility on us to continue doing the work that will warm the hearts of the audiences," Inaamulhaq said in a statement.