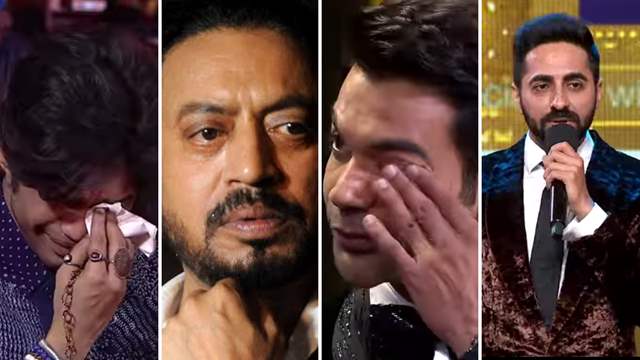 Bollywood lost one of it’s finest actors, Irrfan Khan, in April 2020. That day will always be considered as a black day for cinema as the talent and expertise of late Irrfan is unmatched.

To honour his splendid contribution, Filmfare Awards 2021 awarded late Irrfan Khan. The host of the night, Riteish Deshmukh started off an emotional tribute and pictures of the late actor were displayed on the screen. It was indeed an emotional moment and son Babil Khan could not hold his emotions and broke down in tears. As actor Ayushmann Khurrana narrated a poem as a tribute to Irrfan, Babil cried uncontrollably as the other celebrities sitting in the audience also got teary eyed. Rajkummar Rao also was in tears as he remembered the late actor.

As Babil comes up on stage, he hugs Rajkummar and Ayushmann and says that while he did not prepare for a speech, he thanked everyone for accepting him with open arms and promised to take Indian cinema to newer heights.

In his father’s memory, Babil had worn the same outfit previously worn by Irrfan Khan at the awards function.

Irrfan Khan passed away on April 29, 2020 after a two year battle with cancer. His son Babil Khan is gearing up to make his Bollywood debut.