The film takes us to Madhavgarh of Rajputana state in the 1920s.

Apparently the King of Madhavgarh (Jackie Shroff) ends up 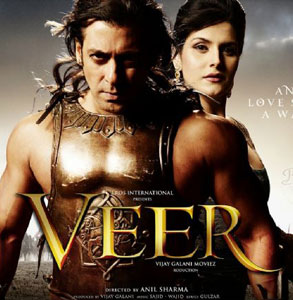 Featured Video
not sticking to his promise. This irritates Prithvi (Mithun Chakraborty) a leader of the Pindari tribe so much that he chops off the Raja's wrist. Thus begins the tale of two sworn enemies.

What follows is the inevitable when it comes to eternal loves stories. The children of the sworn enemies'- Princess Yashodhara (Zarine Khan) and Veer (Salman Khan), fall in love. The love story stretches all the way from a chance encounter in Madhavgarh, to a brief stint in a London university to back again in Madhavgarh. This romance is full of typical Salman-ish naughtiness. And also a lot of giggles and oh-I-wish scenes for girls.

However, truth unfolds; both lovers come to know that they picked for each other the oddest pair. How the two seemingly unmatchable lovers find their way against all odds to unite, paralleled by how Veer gets back at those who cheated the Pindaris is what you'll get to see in the film.

Salman has always been a man of the masses. This movie has been tailored to reach out to them. There are some super-cool dialogues such as the one where a British professor mocks Veer saying- I know your country. Full of dust, dirt and sweat. To which Veer replies to him in the same accented Hindi - If that were the case what are you guys doing in our country for 140 years… cleaning it up? I think I heard a few claps when Sallu miya mouthed that one!

Given the kind of royalty that's shown in the film, a little more could've been done for bringing out the grandeur of that era. Especially when it came to the costumes of Zarine and her girlfriends.

Some of the gaping loopholes include the fact that Dadde's vest which is supposed to be either metal or leather is clearly rubber. Also, the aftermath of a massacre on a battlefield doesn't exactly leave the corpses in equally spaced positions. And, Oh My! This one just shot through the roof -  Salman gets shot by a bullet straight at the heart but still has the energy and life (I guess we can do nothing but credit his will-power and strength of his psyche) to get back at those firangs…

The music is not bad. Classic Sajid-Wajid stuff. It bears the rustic quality that so suits the film. Surily akhiyon waale is one track that stays with you thanks to the deep hounding voice of the singer.

Editing is abrupt. Maybe they didn't want the film to be longer than the two hour fifty minute duration but the transition from one sequence to another could have been smoother.

Salman Khan is at his entertaining best. All his loyal fans and the I-don't-give-a-damn-about-Salman crowd will not be disappointed with his performance. His portrayal of the barbaric fighter, the love-struck college boy and the slick spy all is done in an affecting way. Zarine Khan for a debutant is fairly good. Sohail Khan as the brother who tags along, once again plays a role that's so typical of him!

Mithun Chakraborty does a cool job as the raw, booze-downing and wild fighter as well as loving father. It's nice to see Neena Gupta back on-screen. Her portrayal as a tribal woman is effortless. Aryan Vaid as a prince is okay. Jackie Shroff looks every bit the wicked Maharaja. He is one scary dude in the film.

The movie is almost three hours long. But you don't get bored. Not for a second does the pace of the story get painfully unbearable. If you can handle gore and love served on the same plate, this film will definitely not fail to impress you.