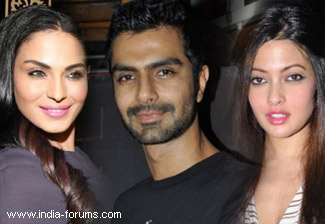 Pakistani actress Veena Malik and Riya Sen, known for their time rivalry, courtesy Ashmit Patel, are playing lead roles in 'Zindagi 50-50', but they shot their scenes separately. Now director Rajeev Ruia wants them to shoot an item number together for the movie.

Riya, an ex-girlfriend of Ashmit, was not really comfortable sharing the screen space with Veena who came closer to the actor when they participated in fourth season of the reality show 'Bigg Boss'.

But now he wants them to shoot together for an item number.

'After finishing the entire film, I have decided to direct an item song with Veena and Riya. I will try my best to convince both of them for the item number,' said Ruia.

'Zindagi 50-50' is about the lives of three struggling girls and the cast also includes Supriya Kumari, Rajpal Yadav, Arya Babbar and Rajan Verma. While Veena plays a sex worker, Riya will be seen as a junior artist in it.

'After watching Veena in 'Bigg Boss', I thought she will be perfect as a sex worker and will justify the role. So I asked Veena to replace Nisha Kothari,' he said.