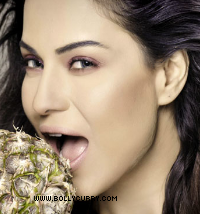 However, according to Malik, the actress never participated in such a photoshoot. As a result, she is filing a lawsuit against Maxposure Coporate Media Private Ltd, Chief Editor of FHM Kabeer Sharma and photographer Vishal Saxena.
It does not only stop there. The Big Boss participant, who is all set to find a suitable life partner in an upcoming televised swayamvar, is also demanding money, precisely Rs.10 crore. This fund will act as protective compensation the magazine cover has damaged to her reputation. Under the Indian Penal Code and Information and Technology act, Veena is subsequently filing to discontinue the publication of the magazine, withdraw any copies and is making sure she is reimbursed her Rs.10 crore for monetary damages.

The endless controversy rollarcoaster doesn't quite seem to end for Veena Malik! Here's wishing the actress the best for this legal fight.

Elliot Page files for divorce weeks after coming out as transgender

Mithun Chakraborty Collapses on sets of 'The Kashmir Files'; complains ...