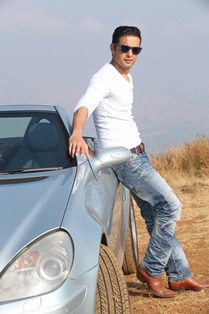 Vatsal Sheth and the Khan Brothers share a very special and fond affinity towards each other. Arbaaz Khan recently tweeted cheering Vatsal for his newest endeavor - 'Ek Hasina Thi' which premiered on Star Plus this week.

On the show Vatsal dawns the character of Shaurya Goenka, a rich spoilt playboy, care free and over confident banking heavily on the financial health of his parents. Vatsal is known to have taken the Khan Brothers especially Salman as his role model and aspires to reach similar heights of success. He apes the superstar's signature style of pinning his phone against the shoulder with his ear while having a long conversation and draws constant inspiration from the Megastar. Among all the Khan Brothers, however, Vatsal shares his closest ties with Sohail.

Their friendship is one to envy for and this was even reflected on the silver screen when they worked together in Heroes'. Sohail made time and ensured he was there in person to congratulate Vatsal during the recently concluded launch of 'Ek Hasina Thi.'

One wouldn't want to mess around with Vatsal - the newest brat on the small screen who is amply supported with the love and affection of the Dabaang trio - Arbaaz, Salman and Sohail Khan.

candidfrisky 6 years ago Vatsal you're doing a great job as Shaurya! Keep it up!!

Crazy-Lover 6 years ago I love vatsal seth.
Vatsal is the best..