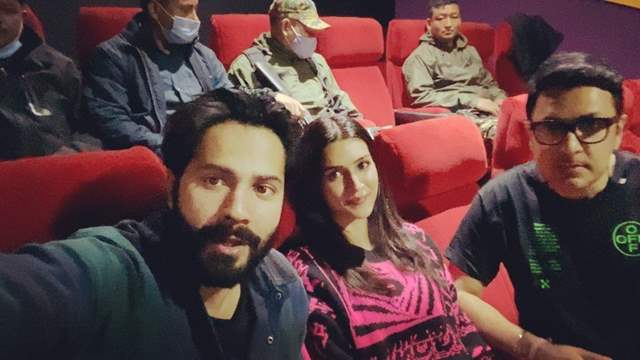 After a year long wait, a Bhediyastic surprise took over theatres as B-town's coolest on screen couple was spotted watching Rajukmmar Rao, Janhvi Kapoor and Varun Sharma starrer Roohi on the big screen.

Varun Dhawan and Kriti Sanon, along with the cast and crew of Bhediya, were in high spirits about returning to the cinemas to enjoy a full blown entertainer. The two stars were at a movie hall after almost 12 months, and their joy of coming back to the theatre was quite palpable.

While the Badlapur star was at his candid best, excited that the magic of movies arrives in our lives again, Ms. Sanon couldn't keep calm either, overwhelmed of catching a film on the big screen "after ages”.

The pair even took to Instagram to share their happiness. Kriti tweeted about the film too, showering praises on the cast and giving a big thumbs up to the laugh riot, apart from being delighted about her big screen experience.

Check out their links below:

If this buzz is anything to go by, looks like Roohi and co are all set to rock the bada parda!