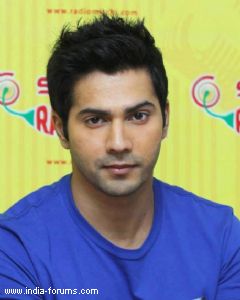 Having king of comedies - director David Dhawan as a father did not make life easy for Varun Dhawan. A self-proclaimed entertainer from childhood, Varun ended up dancing at various family functions though his interest lied in wrestling at that point in time! This week he talks about his experiences and life's valuable lessons on zoOm's new show GeNext- The Future of Bollywood!

This newbie has managed to grab eyeballs with his sincere performance in Student Of the Year and is cashing in on all the adulation coming his way. However, unlike his image of a dedicated and sincere student on-screen, this star kid lived life on the edge in his teens. From getting caught while cheating in the exam to wiping out the scores from his answer sheet with white ink, Varun was never a teacher's pet let alone be student of the year!

Varun may have been a star child but he had to slog it out with the rest of the lot in college to bag his first ever role as a watchman! Humbled with the fan following, this actor has served his term as a director as well and claims to have originally launched Arjun Kapoor in a short film called The White Mountain in college. Don't miss Arjun revealing the tricks his mentor taught him while shooting this movie on a meager budget of Rs. 5000/-

Catch Varun spill the beans on his most embarrassing moments in Nottingham, England when the actor was busted while trying to practice dialogues and entertaining himself in his room only on zoOm this Monday!

If you ever wondered what the true equation was between Alia and Varun, watch the actor speak up on his relationship with her and his first crush only on zoOm. Catch Sana Khan, Alia Bhatt, Sidharth Malhotra, Kajol Devgn, Karan Johar and Uncle Manish Malhotra share some intimate details about the actor this Monday night!

It is so unoriginal and stupid. Every upcoming generation is Generation Next :S Zoom really needs to fire its staff and hire capable people

callmemaybe... 6 years ago love you so much sana khan and varun dhawan

BaAZiGar0 9 years ago I like Lara but could they not find anyone else for the second installment of this fantastic movie ?

ArmaansGirl 9 years ago omo...BALD??? shes be vry bold to do that..wow..admire her gut if she did thatt...

mysticgoryfilms 9 years ago I wish some other actress was chosen for don 2. don't like lara's acting much! anyways, always loved farhan's movies - no doubt this will be no different!

Kangana Shares Video of Anurag Confessing To Have 'Abused a ...
49 minutes ago