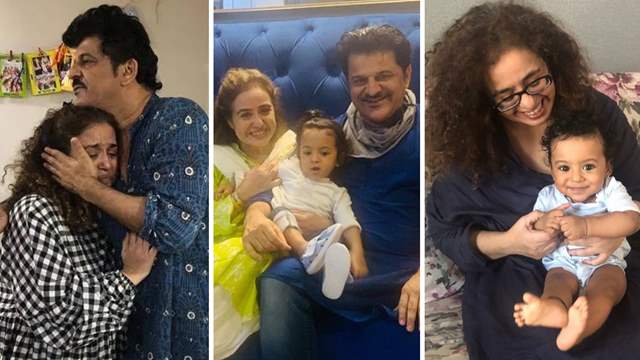 Rajesh was married to Shahid and Ishaan’s mother and actor Neelima Azeem from 1990 to 200, and later tied the knot to Vandana Sajnani in 2008. The couple overcame a difficult battle against parenthood and finally welcomed a baby boy last year.

Vandana has had three miscarriages, three IUI (Intrauterine Insemination) failures, three IVF (In Vitro Fertilisation) failures and three surrogacy failures — over the last 11 years. In a recent interview, she talks about facing both prepartum and postpartum depression.

“I felt I was going down under. As if I was alone in this fight. I wanted to sit alone in darkness and talk to no one. I was in a shell. Something did not feel right, but I couldn’t particularly say what” she told Miss Malini.

Later when Vandana was pregnant with twins, two months into her pregnancy, she was informed that her uterine lining was weak. She was bedridden and was using a bedpan for three months.

One day, she suddenly started bleeding, and underwent a C-section. Unfortunately, she lost one of her babies and her son, Yuvaan, was born prematurely. “I can’t even tell you what a sight it was to see my baby so tiny and the size of an arm, with wires all over his face, surrounded by pipes and tubes. The entire experience was full of stress, pain, anxiety, fear and sadness. Later, my doctor told me that it was prepartum depression, and because I did not attend to it with the right medication or counselling, it soon aggravated to postpartum depression” she shares.

While she was already dealing with Postpartum Depression, another storm hit her when the couple was wrongly informed that Yuvaan would have difficulty in seeing and hearing, and were asked to undergo multiple tests. “Even though another doctor told me that my baby was fine, I still was doubtful and went ahead and regularly did those tests, which had normal results. This trauma made me insane. My family knew the depression had hit me badly before. I wasn’t ready to understand that I needed help and medical assistance to keep my equilibrium. My baby was growing beautifully, but I was deteriorating” she said.

Vandana hit a breaking point during the lockdown when she collapsed and blacked out and had to be rushed to the hospital. In such times, she says her sisters, mother-in-law and husband were “extremely considerate, loving and supportive of her condition”. She also calls her husband Rajesh her rock.

Speaking of current times, Vandana says she only feels gratitude for becoming a mother and after a lot of medication and meditation, she is in a good state.

“I’m all good, back in action, in control of myself, my home, my baby and loving every minute of motherhood!” she rejoices.

Vandana also urges people to not be ashamed or stigmatised to seek help and advises anyone dealing with prepartum and postpartum depression to not neglect any signs.