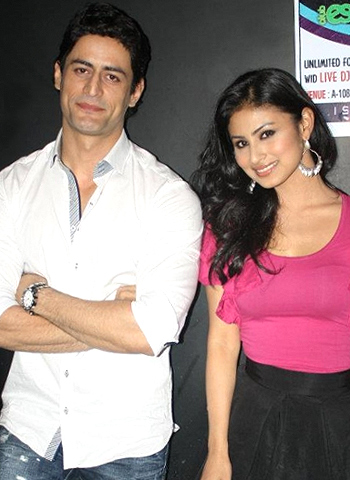 Valentine's Day will have a new meaning for TV show Devon Ke Dev. Mahadev when actors Mouni Roy and Mohit Raina, who are said to be dating off screen, will begin shooting for an upcoming sequence of the show.

Mouni is back on the show and will be seen as Sati. Though she started shooting for the mythological drama Feb 8, she and Mohit, who is seen in the title role, were not filming on the same sets. However, the two will start shooting together from Friday.

"Mohit and Mouni will start shooting together for their sequence from Feb 14 which is none other than Valentine's Day," a source said.

The story of Mahadev will now narrate the bond that Sati and Mahadev shared.

foram. 6 years ago wow finally saw them together.
wat a magical moment it was!

Hopeenlight 6 years ago So, I guess we won't be able to see ShivSati's first meeting in this track until early next week? Hope there will be some off-screen moments that will be shared with fans!! sigh!

foram. 6 years ago cant wait to see them together onscreen recreating the magic.

xxserenaxx 6 years ago MOHIT RAINA n MOUNI ROY rock together luv both to the core ... cant wait to see them together again on screen :)

Hopeenlight 6 years ago The divine and magic weaving couple bringing so much joy & happiness to fans! Love you both MOhit and Mouni. DKDM is a pleasure to watch again with both of you in it..

aleyammakroy 6 years ago I AM LOOKING FORWARD TO SEE THE SHOW, LOVE TO WATCH MOUNI ROY. WE MISSED HER. ALL THE BEST.