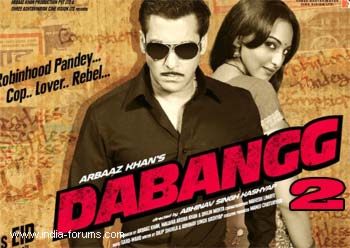 UTV Motion Pictures has shot down reports that it has bought the rights of Salman Khan-Sonakshi Sinha-starrer "Dabangg 2".

Rumours were abuzz that UTV had purchased the rights of the sequel to the 2010 blockbuster "Dabangg" for a whopping Rs.140 crore.

UTV officials have put all speculation at rest by releasing a statement.

"There have been irresponsible reports in certain sections of the media that UTV has bought the rights for 'Dabangg 2' for Rs.140 crore, despite us clearly denying this," an official statement from UTV Motion Pictures.

"We would like to clarify that UTV has not purchased the rights of the movie in question. We have been very open about announcing our new projects and communicated them to the media and will continue to do so. We hope this puts all speculations to rest," the statement further said.

The original "Dabangg" was directed by Abhinav Kashyap. Filmmaker Arbaaz Khan would be wielding the megaphone for the sequel. It is slated for release this year end.