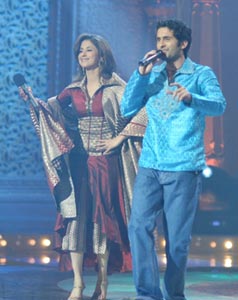 Everybody seems to be smitten by the host of Waar Parriwar, Urmila Matondkar. Right from the judges to the celebrities on the show to the participants. For instance, in this week’s episode the Punjabi brothers, Amit, Hanit and Arvind, made the rangeela girl blush a crimson red with their performance.

The Punjabi brothers bring the house down with their performances week after week. And, this week was no less. Their boisterous rendition of the song Dil le gayi kudi ki had the crowd cheering and the judges applauding them wholeheartedly. Buut what brought out the flush on Urmila’s face?

One of the three brothers, Arvind, wanted to change the lyrics of the song to Dil le gayi kudi ki in honour of the host of the show. even an experienced actress like her was embarrassed when she heard this and blushed a crimson red, almost forgetting her lines in the bargain.

sweeety00 14 years ago He is so damn lucky. I so wanna meet Urmila. I love her to death

14 years ago Thanks for the info