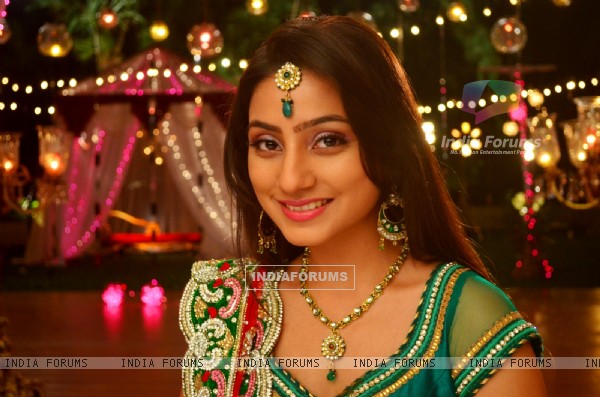 Spellbound Productions' Doli Armaanon Ki has taken a three and a half years leap but considering the change of time and pace, it is still seen that Samrat's male chauvinistic behavior is still predominant and he still dominates over his family members.

With the entry of Anupam Shyam Ojha who plays Tauji in the show, things are to get worst for Urmi in the upcoming episodes. As seen in the ongoing track Tauji who is very particular about his shoes does not like it all when those get dirty, so when Urmi who is in a state of anger spills dirty water on his shoes. Urmi (Neha Marda) is unaware that Tauji is Samrat's uncle.

A high voltage drama will be seen in the upcoming episodes as Samrat (Mohit Malik) will ask Urmi to apologize to Tauji but in his style.

Our source says, "Now when Samarat will come to know about the incident and Urmi's behavior, he will get very furious as per his nature shown in the show. He will once again insult Urmi and will ask her to wash Tauji's feet with her hand as in the form of apology. In order to give respect to her husband's word and Tauji, she will agree to do so. Once again she will be punished for what she has not done but only her mistake was to speak for herself. This will make Tauji very happy as he will feel proud for his nephew Samrat and will be in a pride that he won from Urmi by bringing her to his feet. This will definitely make Urmi feel very bad as she has to bear the brunt which she hasn't done. Later Tauji will realize that things happening with Urmi are not right and thus will support her in the further episodes."

What will happen when Tauji will support Urmi and not to Samrat? To know more keep reading the space.

Joyel 6 years ago Those who hate DAK show is the only fans of PV2 and their pair jodi of ijaz-shristi.Because DAK steal the 10.30pm space of PV2.

myrah13 6 years ago Dak is wayyy better than all shows showing hard truth..nd hatsoff to mohit malik..bestest actor on tv..I wanna request to mention bad things for actors even if u dont like show..they r dpin their jobs nd mindblowing jobs..love u MM sooo much..

Joyel 6 years ago DAK is better than PV2 in all taste and preference.PV2 doom destiny already predicted after the new pair jodi casting.But in DAK casting not affect the show bcz story is their trumphcard.

ven 6 years ago Agree with everyone that PV2 should not have been taken off for this show...PV2 was way far better...however, I love Doli Armaanon ki lead pair chemistry. They have great chemistry. I just wish the story was better. Mohit and Neha are fabulous!

princessonline 6 years ago I agree that what's shown in this show is really hard to watch, but I completely disagree that this show should be shut down.

This show showcases reality. I have seen so many Indian men behave this way. Samrat is completely in the wrong but the truth is there are so many men out there that are just like him if not worse. I don't like seeing Urmi getting abused, but I think the makers of the show are setting the base and getting women to connect with Urmi and her plight, perhaps even relate to what she is going through. I do think that at this point we've connected enough with Urmi and now she needs to take a stand. If they showcase Urmi fighting against Samrat and taking charge of her life this show will become a lot easier to watch and will actually send across a very strong and powerful message.

Pirated_Fun 6 years ago I feel so far the show has shown the reality of men in india or rather most men in india well i have seen my own cousin going through the same shit urmy is going through ...This show so far has nothing to like about it apart from the brilliant performances..because people believe in escapist shows.But it is high time Urmy fights back else the whole moto of women empowerment will go to hell and she will become a doormat as most of the leads in TV

enigma1 6 years ago @ Alex23: stop being all preachy and judgmental here. Everyone is entitled to their opinion. No one is asking you to watch or not watch the show. So, stop giving your unsolicited advise. You have an opinion and do the others.
If anyone wants to feed on the crap they are showing, it's their choice. At the same time, there are other people who don't like it and hence are expressing their opinion.
By the way, for someone who claims they don't watch the show, you do have quite an opinion about this show, it's characters and the actors.

Desdemona 6 years ago It is a sin to watch this serial. Neha Marda's immage ,beauty and talent are totally damaged. About the hero , the less said the better. Where did he appeared here ? How odd are his features and role ?
Very cynical MIL. She will never be
respected in future by her grand children.
Stop putting this horrible show on our faces as soon as we switch on
the TV .


Visa were so popular hope it gets the axe soin

Kwerky 6 years ago To all those who think that this shows way too much negativity, cra*, is an insult to women etc...kindly step out from your dreamland. What this shows is not even a fraction of what women endure in this country and nearly every country in this world. What actually women endure is not even fit to be shown on The IDIOT BOX because stomachs will churn. I guess most people on this forum only want to to see outlandish eye-locks, heavy breathing between 'beautiful' people with HD make-up, designer clothes and six pack abs who 'rock'.

It surely is confounding to us as 'educated' people that why does the female lead endure all this nonsense and abuse. But that is a reality for millions of women in India. So if you can't endure it or don't even understand (let alone empathize with it) it...please change the channel or watch re-runs of your popcorn candy floss trash on Indian TV.

I don't watch this show. But had to comment here seeing the negative comments after reading 'you rock' , 'you are an angel' comments on totally senseless shows' articles on this forum.

If nothing, people can at least appreciate the incredible performance by the male lead as an MCP, which is miiiles ahead of the dishy, shirtless dudes on other shows who can barely emote.