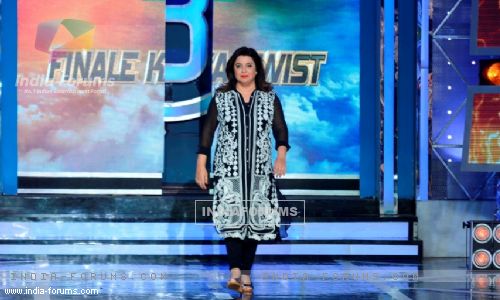 The chemistry between Upma -- a blend between actors Upen Patel and Karishma Tanna -- is working well for the ratings of Bigg Boss - Halla Bol, says host Farah Khan.

The closeness between the two contestants of the reality show has become a major talking point of the ongoing extension of the Bigg Boss 8 season.

"Upma (Upen and Karishma) is doing very well. I'm happy that TRPs are doing very well. I cannot take the credit for that. I think the show has also become more interesting now," said Farah, a popular choreographer-filmmaker.

"I'm happy that the show's TRPs are steady because if the TRPs fall, then definitely the blame would be put on me," added Farah, who was present at the music launch of film "Mrs. Scooter" here Monday.

"Bigg Boss Halla Bol" series started with five challengers from past seasons of the show, competing with five "champions" from the eighth "Bigg Boss" seasons. It airs on channel Colors.

shalini1n 6 years ago UPMA really. haha. no one is interested in their fake romance

6 years ago Yes upma got the trps which the whole season of BB8 did not get.Rotlu Rulathi had made the show a flop but upma brightened up and trps went above 3 for the first time.

6 years ago Yes Upen was always the highest TRP gainer in this season despite the show promoting Gautam's phattoo antics every week. Upen Karishma are much more interesting & genuine than the favored crybaby Gauti Gulati.

Quaint 6 years ago Bigg boss 8 would have been a huge flop had there been no Gautam. Gautam is not the one who asked for sympathy, it was cheapster Tanna who asked for sympathy, anyone who saw the first 2 months of the show, knows how cheap Karishma Tanna was and how Karishma went to everyone to garner sympathy.
The whole time fake Karishma passed dirty comments on Sonali and now fake Karishma forgot she has a bf outside. Upen first was after Sonali, then had something with Soni and then with Natasha. Fake love story, fake woman Karishma with fake man Upen. Upen was with Natasha just before he re-entered Bigg Boss Halla Bol.
Farah, TRP's have been on a fall. People have hated the extension and fake love story, only very few fakesters support Karishma & Upen. People are fed up of Fake created love stories. If we have to watch fake love story, we would rather watch Serials like Is Pyar Ko Kya Naam Doon - Ek Baar Phir !

+ 6
6 years ago Obviously a Love Track is any day better than watching a loser jerk garnering sympathy and getting isolated on his own covenience..!! Nautanki Gauti Abla Naari of Season 8!!