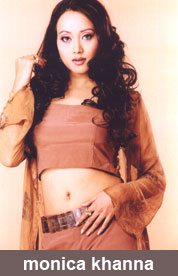 After the entry of four new characters last week in Star Plus' Hamari Devrani, there will be two new additions this week.

Nanavati family is plagued with problems with the arrival of Raghunath Nanavati and his family from Canada. Raghunath's son Tarun played by Nimit Vaishnav is very flirtatious in nature, and the entries of a maid Gopi at home and Smita, in office will pose a bigger threat to the Nanavatis.

According to our source, "The character of Gopi is played by Monica Khanna and Smita is played by Dimple. Tarun will show his true colors before the two ladies which will ruin the reputation of the family. Raghunath and family have come to Nanavati Kunj with a hidden agenda, and these two characters will only enhance their efforts, and are an extension to their planning. In weeks to come, the Nanavati family will face bigger threats. This is a very interesting track which will go on for few weeks".

Dimple has entered in yesterday's episode, and the maid played by Monica Khanna will enter tomorrow.

Well, let's see what's in store for the Nanavatis this time around!!