Rajan Shahi's Sapna Babul Ka Bidaai has always kept viewers at the edge of their seats with various interesting cameos woven into the story line time and again!! 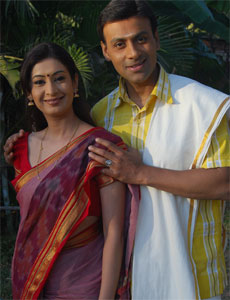 Featured Video
After the dramatic cameo of Eva Grover, Bidaai will see the very talented actors, Anupam Bhattacharya and Payal Nair entering the show to play their part.

The duo plays a very loving couple in Kerala who play a big role in enhancing the love between the four leads in the show.

Says Rajan Shahi, "I wanted to cast Payal for this particular role as I was very much impressed by her performance in a show Goonj Ateet Ki where she portrayed the typical Mallu wife. She is a brilliant actress, and I personally gave her a call and offered this role. Anupam is a good friend of mine, and have worked him for many years now. He is one actor who has been very selective in his work, and I was glad to have convinced him for this role".

"The people of Kerala are so generous and hospitable that I wanted to show a typical Kerala couple who represent the very essence of Keralites, and hence this cameo. The people there have been so accommodating thro'out our stay, that I thought this is one way in which I could thank them", adds Rajan.

Talking about her role, Payal Nair says, "It was a very good experience on the sets of Bidaai, and our cameos give a fresh perspective to the whole story".

Payal who is married to a Malayali in real life has given her own touch to the role. "I have used some interesting slangs, and hope that comes out really well", adds the actress.

Their cameo will stretch to 3-4 episodes..

So here are two more names to the ever-growing cameo list in the show!!

13 years ago I thouight it was Divayka when i first saw the picture lol :p

+ 4
13 years ago So far cameos in Bidaai are reallly very talented.... Anupam and Payal are gud choice.....I am glad to see Payal back even for 2-3episodes.....thanks rajan sir

13 years ago sounds interesting! They look authentic Mallu! looking forward to their tracks on the show :)

+ 7
13 years ago Thats interesting wonder wht wud be their track!!