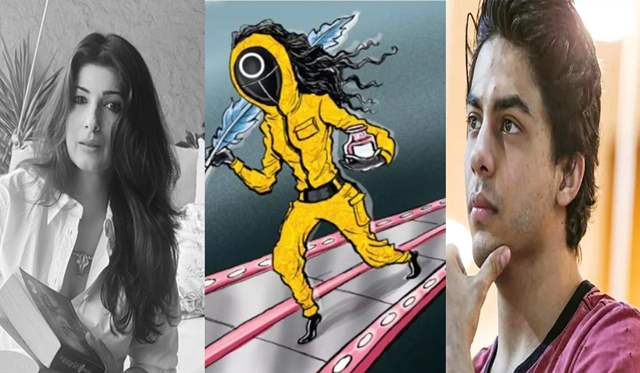 Author and former actor, Twinkle Khanna has dived into her prowess with words and articulated the on-going Aryan Khan arrest saga with a representation thus also expressing her views about the same. As we know, so far an array of Bollywood celebrities have come out in support of Shah Rukh Khan's son and now Khanna recently went on to compare Khan's arrest to one of the episodes of Netflix’s insanely popular show, Squid Game.

In an Instagram post on the same, Khanna shared a portion of her blog post titled, ‘Let the desi Squid Games begin’. Citing the example from one of the episodes of the popular South Korean drama, she wrote, “Each player is given ten marbles and must get their opponent’s marbles by competing in any game of their choosing. In this episode, one of the strongest candidates is badgered and ultimately bamboozled into losing his marbles. I seem to have misplaced mine as well when I read the news about Shah Rukh Khan’s son’s arrest.”-

Khanna also finds it unfair that Khan has been in jail for two weeks without any evidence against him, “While his friend was apparently carrying 6 gm of charas, there is reportedly no evidence of possession by Aryan Khan. Yet, the young boy has been languishing in Arthur Road jail for almost two weeks now.”

Being the master of words that she is, she also emulated popular news anchor Arnab Goswami's viral video saying, “I suppose I feel like emulating one of Arnab’s dramatic proclamations where he once said, ‘Mujhe drug do, mujhe drugs do,’ because I need some heavy-duty psychotropic substances to make sense of this development.”

Khan was arrested by the NCB on October 3. He has spent 17 days in custody and a special court will hear his bail plea on October 20.