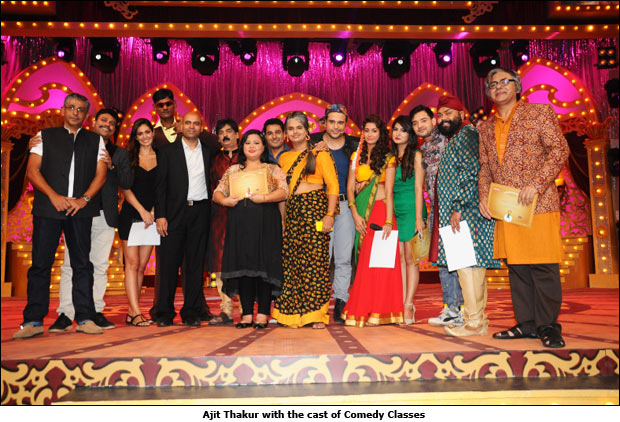 After tickling the funny bone of audiences with stand-up comedy shows, Krushna Abhishek, Bharti Singh, Shakeel Siddiqui and Sudesh Lehri have teamed up again, but this time they will entertain their fans through an innovative show titled "Comedy Classes".

Produced by Optimystix, the sitcom going on air Oct 7 on Life OK, is about an acting school called - Ache Din Institute. One can look forward to some funny moments with Krushna as acting guru and Bharti as a dance instructor, who has her own moves like BhartiNatyam.

Pakistani comedian Shakeel is expected to heighten the entertainment quotient as Urdu teacher, who can speak only seven sentences in the language. If that is not enough, Sudesh will join the entourage as music teacher, who mixes two songs to make his own version.

Ajit Thakur, general manager of the channel, says that they believe in serving the audience with "variety".

"We didn't want to do stand-up comedy, so we thought of doing sitcom. We got the best comedians together. It is a combination of Bollywood and comedy. It's a Bollywood training class," Thakur told reporters at the show's launch here Tuesday.

The event saw the actors performing too.

"We are planning to run it for five to six months. If it works, we will take a break of three months and then come back, so that the quality is not compromised," he added.

Another highlight of the show will be the presence of actresses like Bruna Abdalah and Madhura Naik as students.

Vipul D. Shah, the man who penned some of the most successful comedies for the small screen namely "Dekh Bhai Dekh" and "Shriman Shrimati", says comedy is his forte and he is just taking it forward with the show.

"Our 'Comedy Circus' ran for over seven years. We thought of getting the same artists and do a sitcom. I am a producer, but also a writer. I've written for a few sitcoms like 'Dekh Bhai Dekh' and 'Shriman Shrimati'. So, I wanted to do what I am best at," said Shah, one of the partners in Optimystix.

During the course of the show, Bollywood stars will up the glamor quotient.

"We will hopefully have the cast of 'Happy New Year'. Maybe, we will teach Shah Rukh Khan how to act in one of the episodes. The stars will be presented according to the format of the show," said Shah.

8 years ago producer and director should consider vivian dsean aka ABHAY RAI CHAND for vampire. they should see his show PKYEK, he done a great job as a vampire, his style, attitude, emotions, superb.
if they want new face they should consider him, no one can replace him or take same place in the heart of audience.

+ 3
9 years ago hehehehe love the title

looking fwd for this movie... but for me

+ 4
9 years ago I feel like vivian THE desi vampire too should have very fair skin ...So it has to be either IMRAN KHAN or ALi ZAFAR

I hv a doubt, do fans of these shows romanticise vampires in thr dreams :P

+ 4
9 years ago Hmmm...interesting..lets c how bollywood presents this genre of films...I hope it doesn't turn out to b a comic flick instead...fingers crossed...

9 years ago i guess even Neil should be in the race for the role...he could be the one...