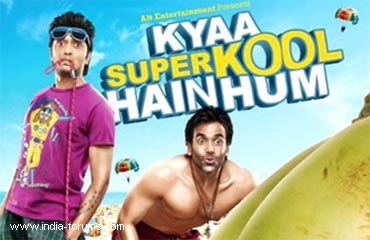 Actress Neha Sharma says it will be unusual to see her co-star Tusshar Kapoor wearing swimming trunks and coming out of the sea like a beach babe in "Kyaa Super Kool Hain Hum".

"We are shooting in Goa right now for 'Kyaa Super Kool Hain Hum' where Tusshar is showing some skin. He will be seen wearing yellow trunks showing a sneak peak of his bum like John in 'Dostana'," Neha told IANS.

Writer-lyricist Javed Akhtar says it is unlikely that he would write for television shows because he does not follow the medium.

"I have never seen television (shows). I don't follow it. I don't like the concept of finishing the episode on a crucial point and making the viewer wait till the next day or next week. I don't think I will write for a TV show," Akhtar said.

The only show he followed was "Buniyaad". Directed by Ramesh Sippy, it was first aired in 1986 and was one of the most popular soaps on Indian TV.

He might not want to write for TV shows but he keeps appearing on the small screen in different roles - he was seen as a judge alongside Anu Malik, Kailash Kher and Sonali Bendre in the fourth season of "Indian Idol".

The 67-year-old returned to the small screen last year as the host of the "Classic Legends", a show revolving around yesteryear's popular names.