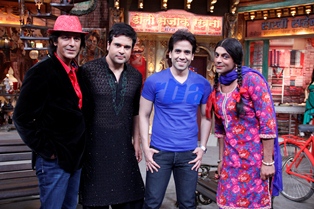 Yes you heard it right! Tusshar Kapoor is committed! But wait, we are not talking about Tushar's relationship status instead his commitment to work. Recently during the shoot of Star Plus' Mad in India - 100% Desi Show', Tusshar proved that commitment is an act and not a word when the actor landed to shoot for an upcoming episode on the evening of his dad Jeetendra's birthday.

So, on Jeetuji's bday eve, when many people from the film fraternity were gathering for the veteran actor's birthday bash, beta Tushki was busy shooting for Mad in India.

A little birdie informed us that despite the fact that Tusshar is very close to his father and it was his birthday, the actor patiently waited till the shoot ended and was spent time chatting up with the stars. In fact, he waited till he finished his bit completely with utmost dedication and only after finishing the shoot rushed home to spend some time with his daddy dearest!.

As they say work comes first... hats off to Tushar for his commitment!

Jaya Saha to be Arrested by the NCB Soon: Report
5 minutes ago

Shaheer Sheikh opens up on getting offers from Bollywood in ...
28 minutes ago

"This NEWS is FALSE, MALICIOUS & MISCHIEVOUS": Nikhil Slams ...
36 minutes ago