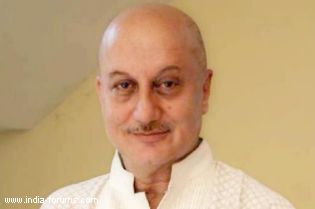 Veteran actor Anupam Kher's forthcoming show titled "The Anupam Kher Show - Kucch Bhi Ho Sakta Hai" has some popular names like Shah Rukh Khan, Naseeruddin Shah and Akshay Kumar as guests. But he was unable to shoot with Amitabh Bachchan for the chat show despite all his efforts and is hopeful of getting the megastar in the next season.

The celebrity chat show with live audience is an extension of Anupam's renowned autobiographical play "Kuch Bhi Ho Sakta Hai", which is about his failures, setbacks and how he manages to laugh at them. He has been doing the play for the last 10 years and inspiring many since then.

And now, he is ready to unfold stories of celebrities including popular comedian Kapil Sharma and cricketer Yuvraj Singh apart from Bollywood biggies like Vidya Balan and Mahesh Bhatt, through his conversations with them.

"All were interesting. Every individual has a story and all are interesting if they talk about the truth. Success of the show is based on honesty. They've come to me trusting me completely. I didn't give them brief," Anupam told reporters here.

He said it was difficult to choose guests for the show, but knew that he wanted to take "people who are known because they become role models".

And when it comes to the Indian film industry, nothing gets bigger than Big B. But unfortunately, he couldn't have an inspiring conversation with Amitabh on the show.

"I tried my level best to get Mr. Bachchan. His dates were clashing, so he said next season. I think Salman (Khan) will be hopefully there too. Apart from them, there are others also from different walks of life who have great stories... Whether it's Narayana Murthy or Sachin

Tendulkar. Let's hope we have them too. I need to make a success out of this for others to say that they want to be on the show," said the actor, who appeared on the fiction TV show "24" a few months back.

Celebrity chat show is not a new concept but Anupam says there are elements of the show that are different.

"I was sure that it won't be based on gossip or any negative questions or not even to promote their films... It's a pure chat show. Only in the end, there is a surprise element for the audience, so that we can show that 'kucch bhi ho sakta hai' (anything can happen)," he said.

The 59-year-old, also the producer, is not nervous about the show that will go on air July 6 on Colors. He is in fact excited.

"I am excited. I am not scared of failure, so that takes away the fear of failure from me,' said Anupam, who has also been part of TV shows like "Say Na Something To Anupam Uncle" and "Sawaal Dus Crore Ka".

"Since I run an acting school, I also feel if we can do our own production we can give work to our students," said the actor, who established Actor Prepares school in 2005 in Mumbai.

While he is eagerly looking forward to his TV show, one can soon catch him on the big screen too as his kitty is full with films like "Singham Returns", "Ikkis Topon Ki Salami", "Daawat-e-Ishq" and "Shaukeen ", for which he is currently shooting.