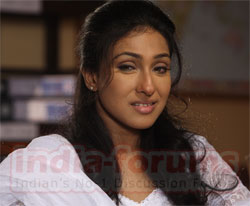 National Award-winning actor, Rituparna Sengupta, believes in getting into the skin of the character that she plays in a movie. However, that is not always such a good idea, as she found out while shooting for Dinesh Chugh's 'Mittal Vs Mittal', directed by Karan Razdan.

Rituparna shot a sequence on marital rape, for the movie. She played the role with such conviction that she scared herself. "It was terrifying," she says, "I kept seeing the sequence for days in my sleep, and kept waking up in cold sweat."

Karan Razdan, on location in Cape Town, where he is shooting for his next film, admits that it was difficult for her to do a differential shot after the sequence mentioned above. He adds, "Rituparna is a director's actor. And the scenes were hair-raising. She used to keep experiencing the feel of the scene, post the shoot. As a director, I took her dedication and ability to get her into character, to my advantage." However, he realized that it would be too much for her to act traumatized one day and cheerful the next. So he toned down the action, and concentrated on propping the shot instead.

According to Rohit Roy, this creativity from the director made shooting a pleasure. "We could look totally in character in a scene, and, in the next, he would come out with this smart aesthetic shot where both Rituparna and I would feel the element of relief creep in, making the next difficult scene easier," he adds.

The traumatized Rituparna has the last word. "We really admire the way Karan has commercially shot a realistic film without losing out on the values," she says.