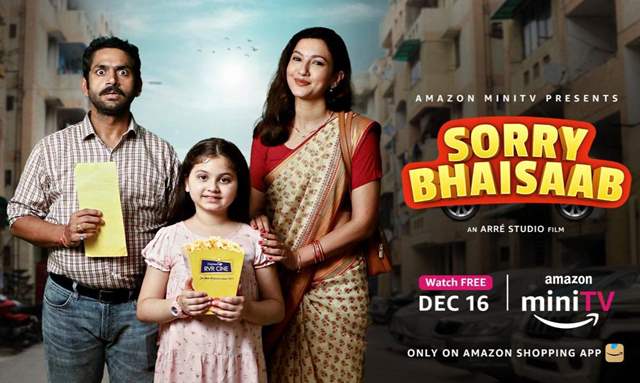 MiniTV is a free, mobile video entertainment service within Amazon’s mobile shopping app, which serves as a TV-in-pocket for every single Amazon customer in India

Amazon miniTV launched the trailer for their upcoming relatable and congenial short film Sorry Bhaisaab today which is produced by Arre Studios, directed by Suman Adhikary and written by Sumit Ghildiyal. The short film features talented actors  Sharib Hashmi and Gauahar Khan in lead roles. As seen in the trailer, Sorry Bhaisaab revolves around a middle-class couple, residing in the South Delhi DDA flats, who get duped and robbed, leaving the audience intrigued to know what happens next. The short film, that encapsulates the desires, aspirations of a common middle-class family and how their excitement of getting things for free, costs them dearly, is all set to premiere on December 16, 2021, exclusively on Amazon miniTV.

Sharing the excitement ahead of the launch of the short film actor, Gauahar Khan said, “Sorry Bhaisaab is a very pleasant and quirky short film. The story is very aspirational and extremely relatable and I feel this is the charm of short films with the crisp and snackable content present is what attracts the viewers. I personally had a lot of fun working on this project and I feel there are so many aspects in this film that I personally relate to being a common man and I am really looking forward to seeing how the audiences react to the film.”

Actor Sharib Hashmi further added, “Sorry Bhaisaab is a short film which was envisioned keeping in mind the Indian middle-class couple and their daily livelihood. The story strikes a chord with the aam junta and at the same time makes them relate so deeply with the characters in the short film. The short film has a nice balance of humour and aspiration and that is what makes Sorry Bhaisaab an extremely close project for me.”