We had earlier reported that Sreejita De who had bagged the meaty role of the grown up Ichcha in COLORS' show Uttaran will not be part of the show anymore. 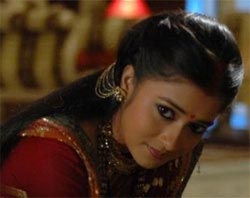 Featured Video
If sources are to be believed, the channel had objected to the fact that Sreejita talked about her role openly to media, and this was a big mistake that cost the actress the role.

The buzz now is that the channel has replaced her with Tina Dutta, the bubbly girl who was seen playing the haunted Paromita in the last story of COLORS' Koi Aane Ko Hai. With this decision, it seems that COLORS has had the final say with regards to the casting for Ichcha.

Tina Dutta was earlier seen playing the younger version of Vidya Balan aka Lolita in the movie Parineeta.

We tried calling Pintoo Guha of Film Farm, but we could not get thro' his line.

If sources are to be believed, new promos for the show were shot last Saturday, and will be on air by today evening.

Sreejita De who has made recognition for herself with Star One's Annu Ki Hogayee Wah Bhai Wah was in no mood to talk about this, and said, "No comments".

While Tina Dutta plays the new Ichcha, Rashmi Desai will essay the role of the grown-up Tapasya.

Let's now look forward to the leap in the story, to know how it fares!!

Akilan 11 years ago HI!DIDI U R LOOKING SO CUTE AND INNOCENT DON'T HEAR TO THESE STUPIDS WHO SCOULD U !BYE TAKE CARE!

nomzdagr8 13 years ago i really really like tina dutta she'z fabulous Gash she would be mine.. nevr mind its ma pure feelings for u tina dutta bless you keep on rockin and best ov luck,,,,

karanvirani1 13 years ago Tina is the sweetest Bong girl I have ever seen, with a mesmerizing voice and hypnotizing innocence. Her appearance in a traditional bong outfit is stunningly attractive. She has got a good break in Uttaran which she needs to capitalize as a stepping stone towards stardom. All the best Tina, the world belongs to u...Cheers!!!!

13 years ago when sreejitha needed 2 keep her mouth shut she said openly n now she is saying NO COMMENTS.hehe but i luv annu

13 years ago Wow she did a superb job in Khela and Durga..hope her magic works in Hindi television too after bengali.