This show has managed to take comedy to the front seat. This second season has been filled with eternal performances by ethnic actors and comedians and they give the other dramas a run for their money. Last week the standing ovation went to Sudesh Lahiri and Krishna Abhishek with the rest of the pairs following suit. Fantastic entertainment over the weekends, we just hope that this entertainment quotient goes on increasing week by week and we could laugh more. Just one question: Why don’t Saturdays appear sooner in a week?

A celebration for Heer-Omi fans out here!! Finally they both met, and what a meeting it was!! Mata Rani listened to all their prayers, and at the right time when Omi was about to get married to Amrit, the reunion of Omi and Heer happens at last, leaving the viewers heaving a sigh of relief and giving them moments to celebrate. With Omi returning home, we have a good melodrama designed for us ahead. Just keep on watching for better entertainment!!

This newly launched reality show changes life of people, by getting the experts and changing the deformity one has ..This week the audience went through the journey of a woman who was rejected about 17 times because she had a permanent deformity on her face..But one man who loved her for her qualities wanted to tie knot and this new venture of Sony shortlisted her and gave her a makeover which surprised the bridegroom and the bride had a glow when she saw her new self in reflection. The show is all set to get many lives back on track and gets a thumbs up for such a brilliant concept and show.

The show which is by the makers of "Dill Mill Gayye" is definitely a must watch.The misunderstandings between Ashu and Arjun which were created when the curtains were raised this week are sorted out as the week comes to an end.Boys of Victoria practice for their upcoming Meerut Match, but also complain against their new coach... The biggest twist in the tale was when Raghuveer says abrupt things against Ashu in the college campus and both Arjun and Nakul tell him "thats enough"!Finally seems Arjun is getting out of his fathers influence, also fans saw some cute moments between Nakul-Saakshi and Arjun-Ashu. The show is becoming interesting as days go by...

This show recently sparked up and reason? Well we had a great comeback by none other than Swapnil!! He came in the midst of Shlok-Radha’s wedding, and turned the entire thing upside down. The wedding didn’t happen and Swapnil began his meanly acts with Radha, and giving Shlok a pain of the separation, well for us it turned as a respite for the viewers who were waiting for some spicy thing to unfold. Though we feel sad for Shlok, and some questions are still unanswered, nevertheless with Swapnil coming back we can hold on to the show for some time now!!

Some moments of relief, some not!! Prachi trying hard to get Milind remember his past is a good sign for Milind-Prachi viewers. But on the other hand Ayesha using her evil tactics in separating Milind Prachi by using Aalap and Sukriti is a strict no-no for the viewers. What one cannot understand is that how can Ayesha even dream of marrying Milind when she very well knows that Milind is still married to Prachi? He only has memory loss; his relationship has not ended with Prachi. Mockery of marriage again in the making…well no surprise!!

The show is just being dragged with some twists which makes one yawn... Though Bhai Raja has proved himself to be a good brother he is definitely not being fair to his loving wife who is all set to follow footsteps of her evil brother and become evil, it will be sad to see the assasination of such a sweet character, moreover the track is being unnecessarily dragged, which is resulting in loosing the valuable audience.

Will they, won’t they!! That’s a question Yudi-Rani fans are asking nowadays. Will Yudi ever realize who is Rani? And secondly whether he will realize that he loves her or not? Well sooner the better, otherwise the show will slip down, but somehow the show is gaining a little hold with Choti Rani turning negative and showing jealousy over Badi Rani and trying hard to kill he. What remains to be seen is whether Rani will be actually trapped by her, well lets see. But one thing is for sure, we need something to push the show ahead…

Sameera is kidnapped, Captain Abhimanyu has a new face which is not digestible by the fans, meanwhile Samrat/Jahan is very cleverly fooling the Hawks team.... The track is being pulled on unnecessarily.. The show definitely needs a positive twist to get back audience attention.

Can’t understand where the show is heading now. First Gauri and Samar seek revenge on each other over Nikhila’s murder, now when they are actually getting close; again a misunderstanding is being created by doubting on Anupam and Gauri’s relationship when they are about to trap Maya. When something is not there to move, better create misunderstandings, use the same old tactics and read the story again. Right? Well, everything happens in the serial land, whom should we complain?

Please note: There are lot of shows and to give fair chance to all we try to cover all the shows alternatively!The views expressed are solely by the author. 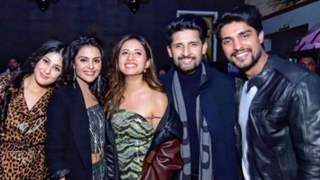 14 years ago they never show that thumb..this show alway up for me what i realy want know how this showing doing on indan and pak i am sur this show doing good

+ 4
14 years ago the fact that that Alaap is even thinking of getting it on with Sukriti who is haven a baby is just too disgusting to watch now,Michi is the only thing that's keeping the show together and if they don't do something about Milind's memory soon Michi's jodi is not gonna help the show forever.

14 years ago this is one drama i am really enjoying at the moment. Never used to watch it before, but Shlok and now Swapnil make it worth watching and of course the lovely radha!

14 years ago thanx...kyunki deserves worse than this...the fact is that smriti could do nothing after her cumback in the serial...she's just lost her charm of carrying on this serial

14 years ago Ok I had clearly no idea that both shows were by same people. But it's heading towards endsville now..so all's well.

Kayamath and KAA should just close down !
What are both the creative team upto..no idea !!..

Comedy Circus is good too. I love Shana Shakeel...ALOT !

+ 7
14 years ago Jersy No 10 is heeding towards its end, from the begining it was said that the show will end in a year... but its just getting better, absolutely all the characters still remain the same..... and Arjun Ashu's love story is really cute.... Nakul and Arjun might finally end their enimosity.... The frndship and the youth feel of the show is just fantastic!! CC2 is rocking.... each episode is filled with laughter dose!! And it was treat to see Omi andHeer Meet finally hope they unite soon!