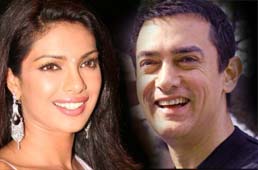 New Delhi, Sep 15 Author Alexandre Dumas' popular novel 'Three Musketeers' is likely to be turned into a film in Hindi.

PVR Pictures is said to be in talks with Summit Entertainment, the distributors of Hollywood film 'The Three Musketeers', for the Hindi remake and reportedly they are considering Aamir Khan and Priyanka Chopra to play prominent roles.

'They are considering casting Aamir as the Duke of Buckingham and Priyanka as Milady de Winter, who is one of the antagonists in the film. But the actors to play three musketeers are still not known,' the source told IANS.

'Three Musketeers' talks about Porthos, Athos and Aramis who served the king of France as his best musketeers. After discovering an evil conspiracy to overthrow the king, the musketeers come across a young, aspiring hero, D'Artagnan, and take him under their wing. Together, the four embark on a mission to bust the plot that not only threatens the crown, but the future of Europe itself.

Huma Qureshi Loses Cool; Says She has been 'Unnecessarily ...
35 minutes ago

2020 is Turing Out to be a Fruitful Year for Prabhas!
35 minutes ago