After Bollywood's recreation of the 60’s and 70’s era, now it’s the turn of Television to do the same. And what better way to do so by rekindling the golden era of music and offering a tribute to none other than the legendary singer, Kishore Kumar. 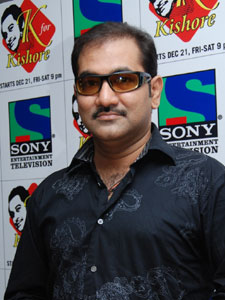 Featured Video
He came, he sang, he conquered - that’s Kishore who even after 20 years of his death embodies music and versatility for the youth of today.

We talked to Sudesh Bhonsale, one of the judges of the show to know more about Sony's new reality show - K for Kishore. Sudesh himself was too excited about the show which has already completed the shooting of the first two episodes. “I am really excited and happy too. It’s like reliving those memories of Kishoreda and to listen to those songs again, it definitely gives an ecstatic feeling. And believe me, I know too many are excited just like me. The number of calls I am getting today proves this”, says Sudesh. And how different is the show from other singing reality shows? “This show is very different. First of all we don’t have any SMS voting. The judges and the live audience will choose the winner. We will not be looking for some clone of Kishore Kumar here, nor would I say we are looking for someone like Kishoreda. Kishore was one and only one, unique. This show is more of a tribute to the singer and also a treat from the channel house to the fans of Kishore”, is what Sudesh has to say. 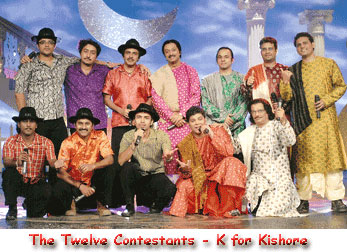 Auditions were done around the country and 12 talented contestants were chosen. We asked him to tell us more about the contestants. “Auditions happened and from there, we have selected the best 12. The contestants are all talented singers and not amateurs. All of them are professional stage singers, and few among them have even done a couple of playback singing”. Then he adds, “These singers will be singing only Kishore songs. But the winner will be chosen not just on the basis of the singing. The contestant will have to perform just as Kishoreda would have done while performing the song on stage.”

What does he have to say about the host? “Rajeshwari is very good as a host. She did a marvelous job in the first two episodes we shot. She is like the connecting cord between the judges and the contestants”, and then adds laughing, “Please don’t miss the first two episodes where we all would be dressed like and act like Kishore. The show would open with a performance by me in full Kishore attire.”

Kishore Kumar is irreplaceable. But with this unique concept, the fans of Kishore will get to pay a tribute, and remember him for his invaluable contribution to music; cherish the phenomenon called Kishore Kumar, treat themselves to the timeless beauty of his magical songs and relive those lost moments yet again.

14 years ago I expect some rare melodious Kishore songs from the 50 s instead of the same repeated songs like Om shanti om, chalte chalte, roop tera, mere sapnon ki etc.

There are thousands of rare yet beautiful Kishore songs which many people, especially youngsters might have not heard which would be worth the effort

14 years ago I wished that they had better judges for the show... Not impressed with either of them!!

I also fear that having songs of just one singer might just make the show monotonous...

Good points are - no public voting... Mostly old songs will be played... But then, you never know if contestants only choose songs like 'Pyar ke dil pe maar de goli' 8(

+ 3
14 years ago @Thakur Saab : You think Bappida will let go of a chance to sing that song to Kishoreda...especially since Kishore is his phabarite shinger...?

@Barnalidi - thanks. Kishoreda came,he sang, he conquered and he is still ruling my heart.Just can't wait....

I am anxiously now waiting for tomorrow 9PM. Atlast we get a show that will be dedicated to only retro songs.

Sudesh Bhosle is one of my favourites. Good to have him there and hope to hear songs from him regularly.

Bappida..... Hope he don't start with the same Chirodin Tumi Je in every episode. =)) We have heard it now many times on SRGMP. Not anymore please.