Featured Video
How will the year 2008 be for her?

It will be a good year. She will hit the mark. She will move ahead in her career as well as personal life.

Any chance of seeing her in Bollywood?

She will surely get a break in Bollywood, but she needs to be careful. The first attempt of films may not click as per people’s expectations, but after that, there is scope for success.

He would be seen more as an actor.

Initially, 2008 would be good, but later he might have to wait for things to happen, and by year end, again good things will get better. Overall, a mixed year, but a stable one. He should be careful about accidents around March and April.

It will be good. Whatever disturbance was there till 2007, will get settled. She would be settled personally and professionally. She would do creative projects which will be difficult initially, but will eventually give her success.

How will the new year be for him?

Good. New beginning is there which would involve him emotionally as he has high hopes too. If he works towards his goals, he will taste success. He should not get carried away and remember the people who contributed in his growth.

Will his “Armaan sir” success of Jassi jaisi Koi Nahi be repeated?

Can we see her in any other project other than Kahaani?

Yes, she will be seen in a new project.

How will the new year be for her?

Overall a good mixed year. Creative and hard work is indicated. She should be careful of her health. She may win an award too in 2008.

2008 is one of the most important years of her life. In the beginning of the year, she will be in command. By mid-year, she will feel let down emotionally, possibly surrounding her projects also. Overall, it will be a transforming year for her. She will achieve completion in many of her endeavours.

Yes, she will work outside her production house too.

9X- Overall good. They might come up with new partnerships and adventure deals also. They should be careful of the surroundings, competition and the risks they undertake.

Zee next- A year of new beginning in 2008. They can look forward to expansion and can bring in innovation in programming as well as branch out globally in a big way.

NDTV Imagine- Initially they may face disappointment and try to venture into unknown direction. By the year end, they will experience success.


The whole team of Telly Buzz wishes all its members, readers and the whole television industry, A very happy New Year and wish that all have a great year ahead, full of happiness, peace, good health and prosperity. And just like we have been presenting the hot news and gossips of the television industry in the past year, we will continue to give you the most happening news in the coming year as well. So, do keep checking Telly Buzz and Happy Reading!! 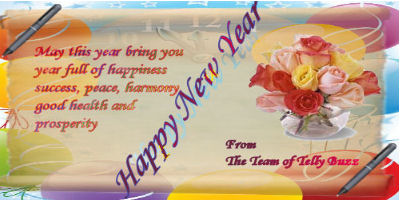 P.S: We have tried our best to cover almost all the stars, who have the highest fan following, and we do apologize if any of your favorite stars have been missed out.

Special Thanks to : Dr. Soniyaa P. Bhaagiyaa for the Predictions...
Signature By: Anu. Rad

janh 14 years ago i want to wish husein a happy and successful year...

14 years ago how come they dont have 'nething for shabbir. am pretty sure he's a FAV!!

14 years ago Thanks, interesting predictions, i hope all the good indications come true for them all.

+ 4
14 years ago thanks especially for apurva agnihotri. hope this year is good for him and is able to recreate armaan sir magic again

+ 3
14 years ago Saakshi really deserves an award for her hard work. Here's hoping that 2008 brings success for her in leaps and bounds.

14 years ago Sakshi better win an award already. She's one of the best all time actresses and yet doesnt get the applause she deserves.