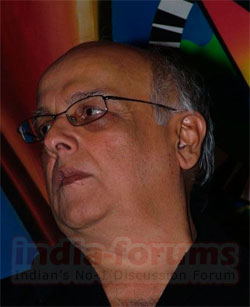 Featured Video
ilms in India, was of course a great chance to recap his past as he has provided chances to many Pakistani talents for working in Indian cinema. For the first time a Pakistani film, "Khuda Ke Liye", is going to be screened in Indian theaters. Mahesh Bhatt opens his heart on this very special occasion:

Q.: "Khuda Ke Liye" is the first Pakistani film to be screened in Indian theaters. What would you like to say?
A.: They (Pakistanis) already have experienced Indian films like "Tajmahal", "Mughal – E - Azam", "Awarapan", "Gangster", "Killer", "Goal" and "Welcome". So I guess it's now our chance to watch and appreciate their films. The film "Khuda Ke Liye" deals with a very contemporary issue. Both Pakistani as well as the audience of the whole world has appreciated it. The most amazing thing is that Pakistani audience experienced the movie in theaters even though there was restriction on screening the film. It's a big hit in Pakistan and I hope it'll attract equal appreciation from the Indian audience also. All the Pakistani singers achieved the same love and fame in India as they had in Pakistan. Actually I believe that India and Pakistan are the same country and people are just divided with only a line.

Q: You provided innumerable chances to the Pakistani talents to work in Indian film Industry. But they didn't allow you making a film in their industry. How do you feel?
A.: Not at all. We were trying to make the film on Benazir. But we decided on the fact that the film would be made only if her family and the government have no objection. But Mr. Zardari doesn't believe that there is anything in Benazir's life which can inspire any film. Who are we to hurt his faith and emotions?

Q.: We have heard that some Hollywood filmmaker has got the right to make a film on Benazir.
A.: I have no clue about how he got the right. I would like to say that when neither her family nor the government allowed me to make the film, then I should not think further on the film.

Q.: What's the reason of thinking about Benazir as your subject for the film?
A.: Actually it was an approach from a film company of Pakistan. They wanted to make the film in collaboration with us. We also thought of making the film on a lady who despite being an important character died in an accident. We may get a lot of drama if we connect the accident with the ups and downs of her life. I thought of the matter from the point of view of a filmmaker only.

Q.: What's the reason behind your heart throbbing for Pakistan and not for any other country?
A.: Why do you think so? You must not have seen "Gangster". I provided James, rock star from Bangladesh, a chance to work in that film. If your homework regarding my work is incomplete then it's your problem. I think about the whole world as my own country and I think of giving a chance to all the talents from all parts of the world. As we have some bitter experience with Pa 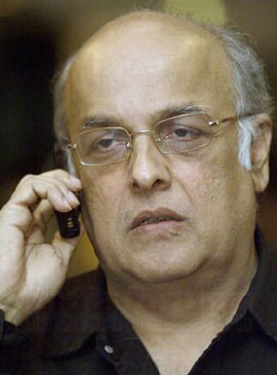 kistan, you always think of making news with that name. I can tell you that I love all the nations in this world including Zambia, Fijia and Cyprus.

Q.: There are many Pakistani singers who achieved success in India. But after "Khamosh Pani" it's in terms of music that "Khuda Ke Liye" is getting a chance to market in India. What do you think about the future of Pakistani films in India?
A.: Box office will say about the future of Pakistani films in India. But I must say that there is a huge change in the market of films in last five years. People have not only changed their point of view, but also their taste for movies. And I must give the partial credit of these changes to the film festivals.

Q.: Both Pakistani and Indian film industries started developing at almost the same time. How do you think these industries have attained so many disparities in such a small period?
A.: It's not possible to locate the actual reasons. But I guess it's because of Military rule and Isolation that Pakistani film industry lacked behind. At the same time they were unable to step forward in accordance to the rest of the world. They have less number of films and it's because of that inferiority complex they couldn't face the rest of the world and gradually they lacked behind.

Q: Both "Khamosh Pani" and "Khuda Ke Liye" have Indian actors. Is that the reason for those films to gain world wide appreciation?
A.: I don't think so. Audience never thinks of the origin of actors. They always think about the film only.