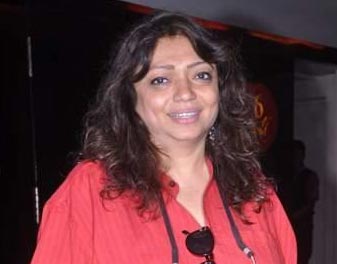 That she is filmmaker Sanjay Leela Bhansali's sister has made her journey into showbiz trouble free, admits editor-turned-director Bela Sehgal whose first venture "Shirin Farhad Ki Toh Nikal Padi" is ready for release.

Clarifying that she is not copying her brother's style of filmmaking to be successful, Bela told IANS: "I always wanted to be a director. Luckily for me, Sanjay started directing. And yes, of course, being Sanjay's sister helped me a lot."

Co-produced by Bhansali and Sunil A. Lulla, "Shirin Farhad Ki Toh Nikal Padi", which marks choreographer-director Farah Khan's debut as an actor, is slated for an Aug 24 release. Farah has teamed up with Boman Irani in it.

Elaborating on the perks that come with being Sanjay Bhansali's sister, she said that compared to those who struggled, a lot of things came her way easily.

Her brother is known for making larger than life films, but Bela didn't want to go that way.

"There is a reason behind that. I said if I would do everything similar to Sanjay, people will not even look at me. Why not do something different where people would say, ok, Sanjay's sister's film is different. I am that kind of a person. I enjoy my life. I am full of masti and fun."

She tried to make "Shirin Farhad Ki Toh Nikal Padi" eight years ago with Farah and Boman, but things didn't fall into place.

"It has been a long journey. Earlier, I started with Boman only and started working on it with a different writer. Things didn't work out. Something happened which I don't even remember, I went through a whole circle and I went back to Boman again with the script."

"Eight years ago, I had asked Farah for the film. I told Sanjay to ask Farah. When he asked her, she said, 'You want me to act in your film?' I said, yes. She took it as a joke but after eight years I went back to her. Farah and Boman fitted the bill perfectly," she added.

With films like "Kahaani" and "Vicky Donor" setting the cash registers ringing, Bela feels this is the right time to release "Shirin..."

"It would not have worked eight years back. Now people have progressed so much that they have started understanding different things. They are hungry for different things," she added.

While brother Bhansali explored the Gujarati community in "Hum Dil De Chuke Sanam", Catholics in "Khamoshi", Anglo Indians in "Black" and Bengalis in "Devdas", Bela focusses on the Parsi community in her debut film.

"Parsi community talk is very 'bindaas'. They are very bold and sweet. I just picked up this one because nobody has touched this and if at all they have, they have shown it in dark. I want to show them as nice and fun-loving people," Bela said.

Arjun Bijlani talks about his first reaction on being ...
32 minutes ago