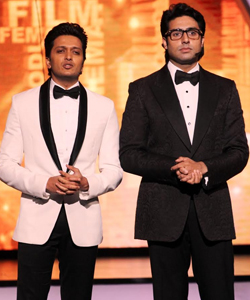 This year, the world's biggest viewer's choice awards just get bigger, better and simply spectacular! Tonight, get prepared for a glitzy, glamorous evening with the biggest movie stars arriving in style on the red carpet, hilarious gags and spoofs, scintillating performances by the hot-steppers of Bollywood and hard-earned recognition to Tinsel town's most deserving performers of 2013 voted and selected by viewers worldwide as 'Lux Cozi Zee Cine Awards 2014 powered by Dabur Vatika Enriched Olive Hair Oil and Karbonn Mobile' airs at 8 PM on Zee TV!
The sizzling chemistry between the lead pair of 'Ram Leela' has clearly spilled over into 2014 as Ranveer Singh and Deepika Padukone team up for the first time ever on stage to present an act that is nothing short of spell-binding. Ranveer's non-stop 14 minute act raises a toast to Bollywood through the ages. The actor grooved to songs picturized on the most iconic stars ranging from Rajesh Khanna, Amitabh Bachchan, Mithun Chktaborty, Govinda (Arun) Ahuja, Salman Khan and Shah Rukh Khan.
Deepika, looking stunning in ethnic wear, danced to a medley of her own hits. The gorgeous heartthrobs had their own solo acts that led into an exciting grand finale where they teamed up and danced to chartbusters from Ram Leela.
When a vrrrooom sound thundered across the auditorium, all heads turned to the back exit only to see the undisputed king of action Akshay Kumar charging in on a bike, looking rugged in a soldier's uniform. On reaching the stage, Akshay stood tall on the bike as it made 6 dangerous circles and leapt off the running bike, only to be lifted into the sky a good 35 feet over the stage. Akshay's act had blazes of fire and the first-of-its kind rain dance at an awards ceremony. For Akshay, his performance at Zee Cine Awards was the unveil of his upcoming film 'Holiday - A Soldier Is Never Off Duty'.
This time, Shah Rukh Khan worked his magic on the audience quite literally! Despite being in pain, the King Khan teamed up with comedienne Bharti to present spoofs of the films nominated in the Best
Film category.  In a hilarious spoof of Dhoom: 3, Shah Rukh imitated Aamir Khan and turned himself in to a magician! The Badshah of romance pulled roses out of thin air, presenting it to the ladies on stage, sent his hat levitating above his head and produced fireworks with his wand and what not!
Sonakshi Sinha's graceful dance and the current rage Honey Singh's rocking performance raised the bar of style, dance and songs at Zee Cine Awards! Ali Zafar as he launched the first-look of his next
release, Total Siyapaa. Teaming up with co-star Yami Gautam, he gave a sneak-peak of their movie through a romantic act.
Catch the most stunning spectacle of entertainment as the world's biggest viewers' choice awards - 'Lux Cozi Zee Cine Awards 2014 powered by Dabur Vatika Enriched Olive Hair Oil and Karbonn Mobile'
airs at 8 PM on Sunday, 23rd February on Zee TV.